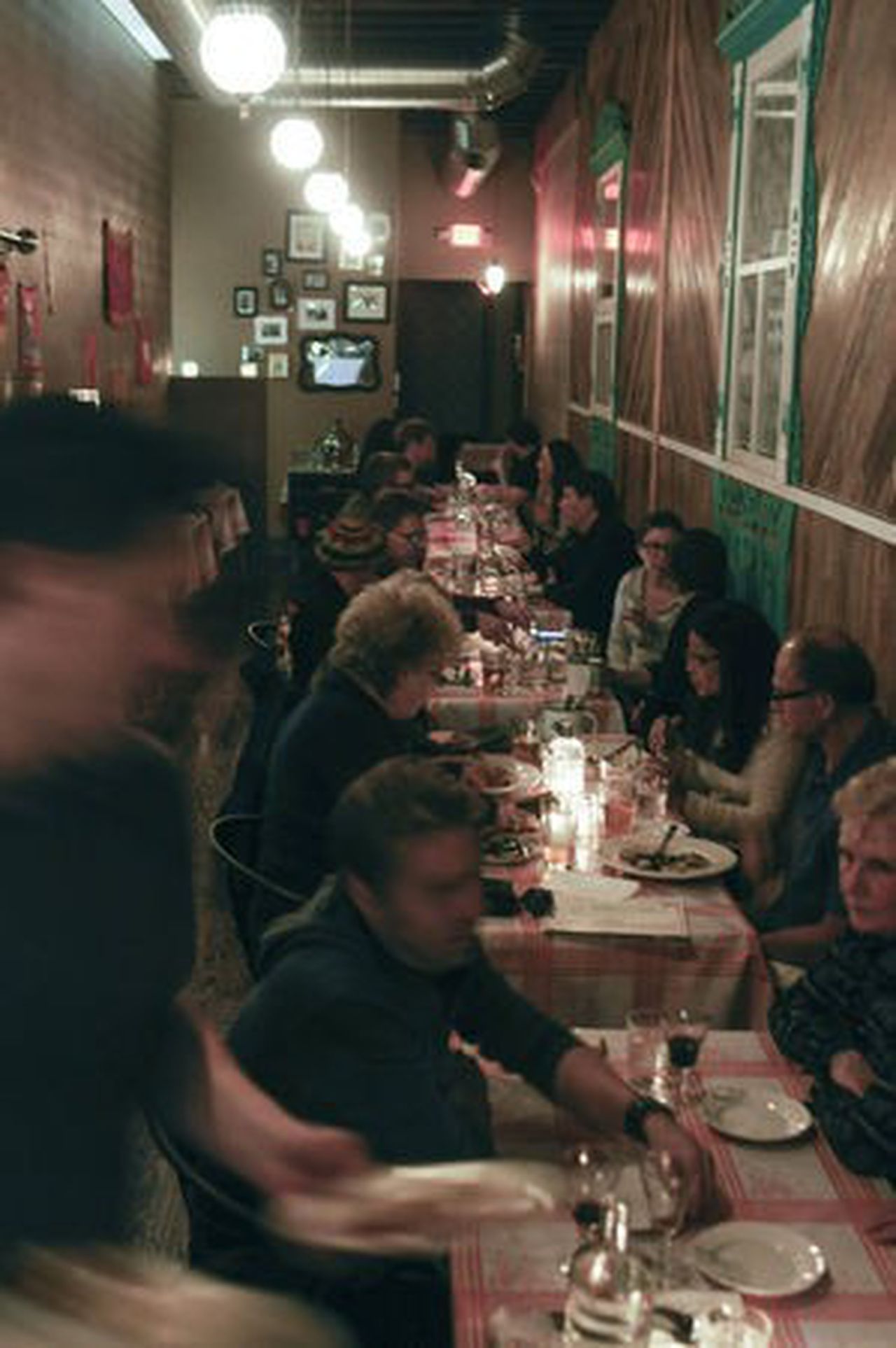 Is there a cuisine more abused in America these days than Russian? Even English food, with its blood puddings and spotted dick, has been deconstructed and reconsidered, inspiring a trans-Atlantic gastropub wave that is still cresting on the West Coast. But Russian salads globbed in mayo, bony salted fishes, jellied veal trotters? Stodgy serf oddities, mutated by Soviet scarcity, then trotted back out for the go-go Putin era? Thanks, but no thanks.

But, as unlikely as it seems, there are glimmers that Portland, a town that, until recently, didn't know a blintz from a bialy, could someday kick-start a Russian food revolution. If that happens, it will have started at Kachka, the four-month old Soviet restaurant from chef Bonnie Morales, nee Frumkin, the first-generation daughter of Russian immigrants, and husband Israel, a front-of-house manager who helped launch Oven & Shaker and Wafu. Like all of Portland's best restaurants, Kachka is a personal vision with a focused mission: to alter our preconceptions of the food of the former Soviet states (over shots of vodka, of course). In that regard, it's a smash success.

Maybe it makes sense. Where better to revive this soiled reputation than Portland, where the citizens have yet to find an item pickled, fermented or cured they don't love, where a cheesemonger can become a household name and kombucha doubles as a sports drink?

Leave the car behind and ride the Eastside streetcar to Kachka, which sits next to Oso Market + Bar and Dig A Pony in the growing drinks district around Southeast Grand Avenue and Morrison Street. Inside, Kachka is a long, narrow restaurant. On the right, decorative window frames meant to resemble a Russian country house, or dacha. On the left, a massive gilt mirror hanging behind the bar, a touch of Brighton Beach glam. The music, a mix of march music, Moscow club bangerz and something that reminded me of a Russian Tom Waits all Shazams in cyrillic. I haven't seen any impromptu accordion playing, but if the scene moves you to order a plate of pale, pickled green tomatoes, stubby sauerkraut and a flight of fine, tundra-cold vodka, I say go with it.

Vodka, march music and food that will make you reconsidering Russian cuisine entirely.

There are tasty vareniki (vegetarian dumplings) with farmer's cheese, plus some cold apps and a beef-free version of the Stroganoff.

But first, a disclaimer. To eat at Kachka requires a willingness to experiment. Order at random, and you might land on strange bits of salted fish, weirdly thick slabs of fatback, creamy cod liver pate or a mound of stringy beef shank cloaked in brown jelly. (To your surprise, some of these dishes will become your favorites.) There's a way to steer the menu toward cheese dumplings and beef stroganoff, and that can be fun, too, but if you've read this far, that's probably not why you're here.

The best and least expensive way to dive into Kachka's deep end is the "Ruskie Zakuski Experience," an array of cold appetizers that the menu says will "fill your table" (in practice, that meant 10 small bites, served over four quick courses, scaled to the size of your group). That pickle plate, perhaps with patty pan squash or a carrot salad flecked with caraway seeds, arrives first, followed by a tasty little sprat – a petite Baltic fish – perched on a slice of hard-boiled egg that's stuck to a piece of pumpernickel toast. Take a bite and mayo gushes out like marshmallow from a s'more.

New plates arrive quickly. A cucumber salad with cherry tomatoes, dill and smetana, the Russian sour cream. Little Georgian eggplant rolls wrapped around a walnut hummus. Wedges of cured mackerel, skin still slick, with a sliver of sweet onion. Potatoes with more smetana. Thick slices of salo, the Russian lardo, meant for picking up salty Israeli pickles and dragging through a dot of coriander-dusted honey. Lovely folds of beet-cured Chinook. A mayo-based bay shrimp and crayfish Olivier salad with peas, carrots, potato and a healthy spoonful of golden chad roe that I suspect James Beard would have appreciated. 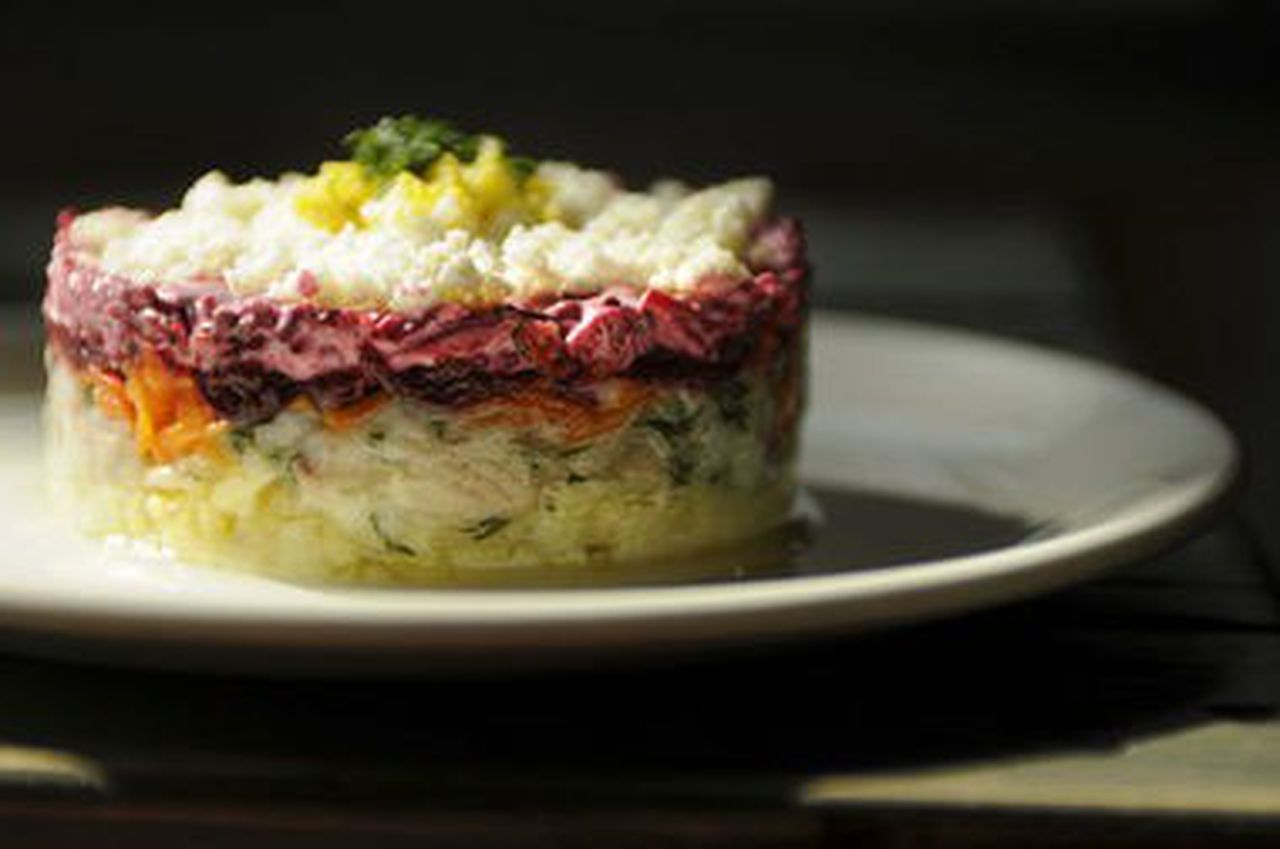 Kachka's "herring under a fur coat," with salted herring, potato, carrot, onion, beet, mayo and a dusting of egg white and yolk.

Most of what Americans think about Russian food is summed up in a pair of these zakuski. First, the cholodetz, a "jellied beef shank and veal feet terrine," which, if Kachka's description hasn't put you off, you will find to be a sort of rustic Russian take on rillettes, served with sinus-clearing mustard and a dusting of egg white and yolk. Turns out, it's awesome. Then, there's the "herring under a fur coat," the menu's "7-layer-dip," built on a base of soft potato and salted herring, with sweet onions, grated beets, carrots, mayo and more of that sieved egg. Assembled in a round, it comes to the table as a little cylinder lined with bright strata – yellow potato, orange carrot, purple beet. The best versions I've had here were the ones most generous with the herring, adding a textural grounding to the soft, creamy vegetables above. Most tables around you will probably be ordering this. You should too.

You're welcome to keep the meal going with a selection of charcuterie or some blini with cured salmon roe — or, if there's an expense account involved, the Petrossian Tsar Imperial Ossetra, at a mere $83 per 1/2 ounce. There are hot zakuski, too, blintzes with mushroom gravy; a lamb cheburek, the airy, flaky Central Asian half-moon pastry; slices of beef tongue served with a sweet onion sauce.But whatever you do, save room for Kachka's dumplings, especially the Siberian pelmeni, with savory beef, pork and veal tucked inside a hexagonal dumpling and steamed into a firm, juicy tiddlywink. These are best served with Kachka's "fancy broth," infused, we were told, with head cheese, and a dollop of smetana. I've ordered these on nearly every visit. 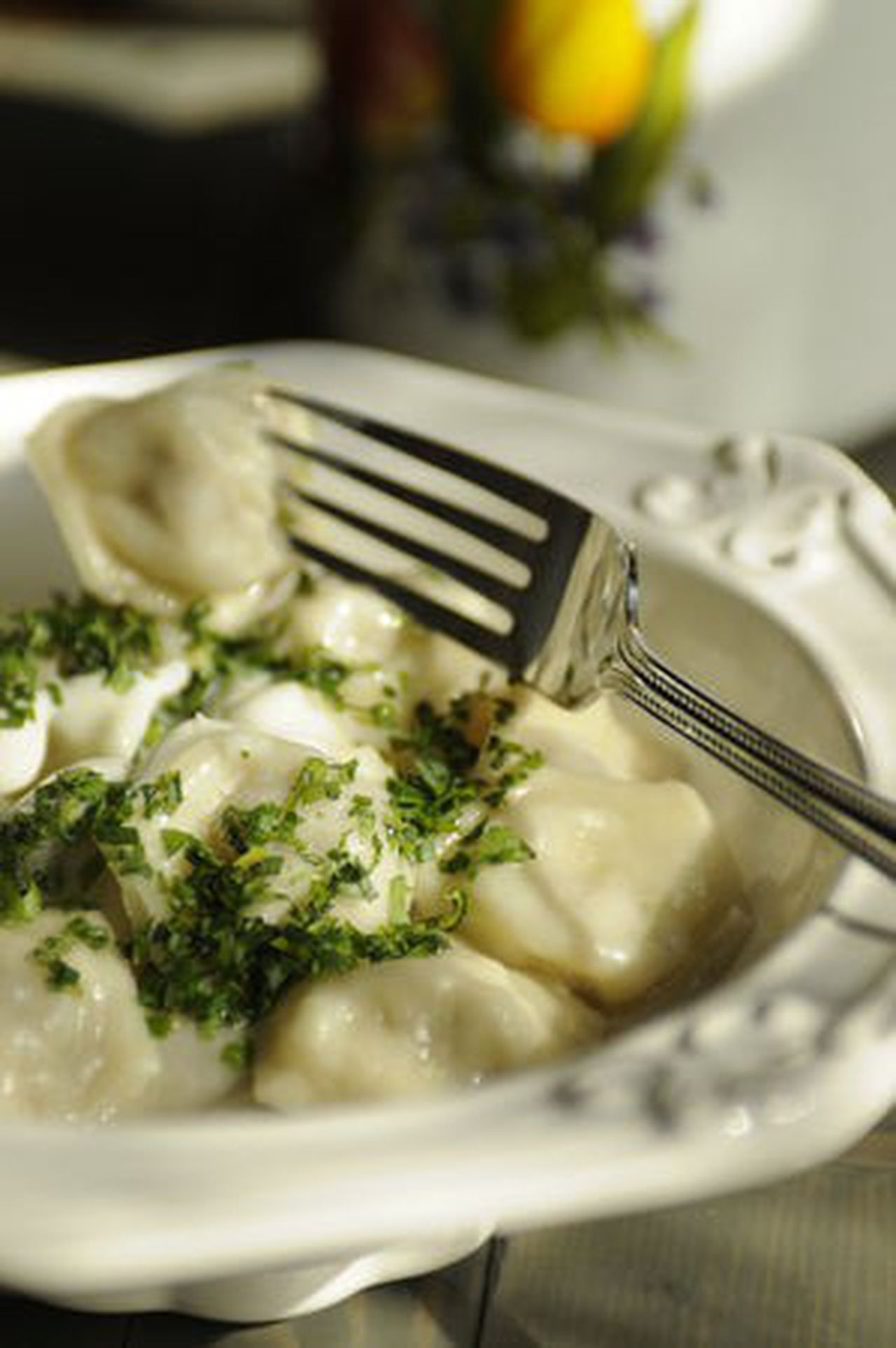 The Siberian pelmeni, dumplings with beef, pork and veal, at Kachka.

There are dishes you might love among the entrees: the whole trout charred over coals; the pork golubtsi, or cabbage rolls, smothered in a sweet-sour tomato sauce. And you'll probably gobble up the stroganoff, with its egg noodles, mushrooms and clever substitution of flash-fried beef tongue, though this was one time I wished Kachka's sour cream were more sour. The chicken kiev, not so much. On my first visit, this fried chicken dish, best known for the butter meant to gush out on the first deep cut, was harder than a nuclear football, fried just below the burning point and served with chlorine-scented kasha. Returning two months later, almost everything else had been dialed in, but I wasn't able to crack the chicken's code. It still tasted like homework.

Service at Kachka is polished without being snobby, nimble despite the added task of having to translate most ingredients and dishes for their neophyte clientele. It's mostly what you would expect from the Moraleses, who met at Chicago's Tru, the 2007 James Beard Outstanding Service Award winner. (And, at the risk of sending the next five years of food-savvy bachelorette parties to Kachka, let's just say that Bonnie Morales has surrounded herself with a front-of-house staff in the dark, tall and handsome mold, starting with her husband.)

The Oregonian uses a star system for its restaurant reviews. Ratings range from zero to four stars, with half stars, and reflect the critic's opinion of the restaurant's food, service and ambience, weighted toward the food. Each star roughly equates to the following:

Speaking of, Israel Morales has set up a lively bar program, with a refreshing Moscow Mule; a mellow vodka-based Negroni mixed with Pelinkovac, a bitter Eastern European wormwood liqueur; and a martini made with Russian Standard vodka and orange bitters good enough to satisfy a gin snob like me. But the most fun is found meandering through the extensive vodka list, surely the most impressive in the Northwest, or choosing a flight from the house infusions, with their rainbow of Russian flavors — dill, horseradish, chamomile.

Finish your meal with more dumplings — the fried, sour-cherry-filled vareniki will do — or some tea in fine china with little nut cookies or candies wrapped in bright foil. It all feels a bit like what you might find while visiting your Russian granny.

Now, can someone point me to the banya?