Should you aerate your own lawn? A golf superintendent explains.

You might not love encountering punched greens but the process is essential to their long-term health.

Welcome to Super Secrets, a GOLF.com series in which we pick the brains of the game’s leading superintendents. By illuminating how course maintenance crews ply their trades, we’re hopeful we can not only give you a deeper appreciation for the important, innovative work they do but also provide you with maintenance tips that you can apply to your own little patch of paradise. Happy gardening!

The most disheartening phrase in golf is not, “You’re still away.”

You hate to hear that.

But don’t blame your superintendent.

Punching, or aerating, is a short-term inconvenience carried out in the name of long-term turf health.

But how, exactly, does aerating work? What are the benefits for a golf course? And should you consider aerating your own lawn?

We asked Jim Nedrow, director of agronomy at The Club at Indian Creek, in Elkhorn, Neb., to help us bore down on the subject.

Solid tine aeration is exactly that. “You’re basically just stabbing a hole in the ground with a solid tine, without removing any material,” Nedrow says.

Core aeration takes things further. “You’re punching a hole, pulling out a plug and then filling that hole with sand.”

Though one measure is more aggressive than the other, both serve a similar purpose: to promote the healthy flow of air and moisture through the soil.

Solid Tine Aeration: Everything you need to know

Compared to core aeration, this is the quicker, less involved refresher for turf, but different courses do it at different times (using tines of different diameter and depth) depending on such factors as climate, maintenance budgets, grass variety and more. In Nebraska, Nedrow and his crew carry out the practice every two weeks from May through August, using quarter-inch diameter tines, which they plunge to a depth of three to four inches. The goal, Nedrow says, is to break through a layer of organic material known as the mat layer so that air and moisture can pass freely through the root zone.

“It can get damp and humid down there and this definitely aids in drying things out,” Nedrow says. “But really what we’re trying to promote is positive air flow and oxygenate those roots.”

Solid tine aeration is also known as “venting,” and for good reason. Nedrow likens those roots to a person trying to breathe through a plastic bag. “We’re basically punching holes in that bag so you can breathe again,” he says.

The practice, he says, has little to no negative effect on the quality of play. The opposite, in fact. “We get out there and roll the greens right after we tine,” he says, “and those putting surfaces are running as well or better than they ever do.

Core Aeration: Everything you need to know

When it comes to solid core aeration, people in the industry take starkly opposing views. “It’s almost like Democrats and Republicans,” Nedrow says. “There are those who think you don’t need to do it, and others who think that it’s 100 percent necessary.”

Nedrow falls into the latter camp. “It’s a non-negotiable for us,” he says (though he acknowledges that it might not be as crucial for other courses “that enjoy some environmental factor that we don’t enjoy here.”) Nedrow and his crew core aerate twice a year, in May and then again just after Labor Day, pulling plugs out of the soil, clearing them away then filling the holes with sand. Sanding helps dilute thatch (organic material that builds up just below the crown of the plant). It also promotes green firmness and smoothness.

But the main purpose of coring and sanding is similar to that of solid tine aeration, shifted into overdrive: creating clean channels for the exchange of air and moisture through the root zones. “If you get hot, wet, mucky saturated soil, your plant basically drowns,” Nedrow says. “You’re providing the passage for toxic gasses to be released and fresh oxygen to come in.”

Do golf courses aerate only their greens?

Depends. Aerating is good for all parts of the course, and for the same reasons. But that’s a lot of ground to cover, and it requires more time and money than many courses can afford to spend.

Nedrow and his crew solid tine their fairways, tees and run-up areas once a year, usually in June, using half-inch tines (twice the diameter of the tines they use on greens), and plunging them 6 to 8 inches deep. “That gets us through the summer,” Nedrow says.

Come fall, after overseeding, they core aerate those same areas of the course. Winter comes, spring arrives, and the cycle begins again. 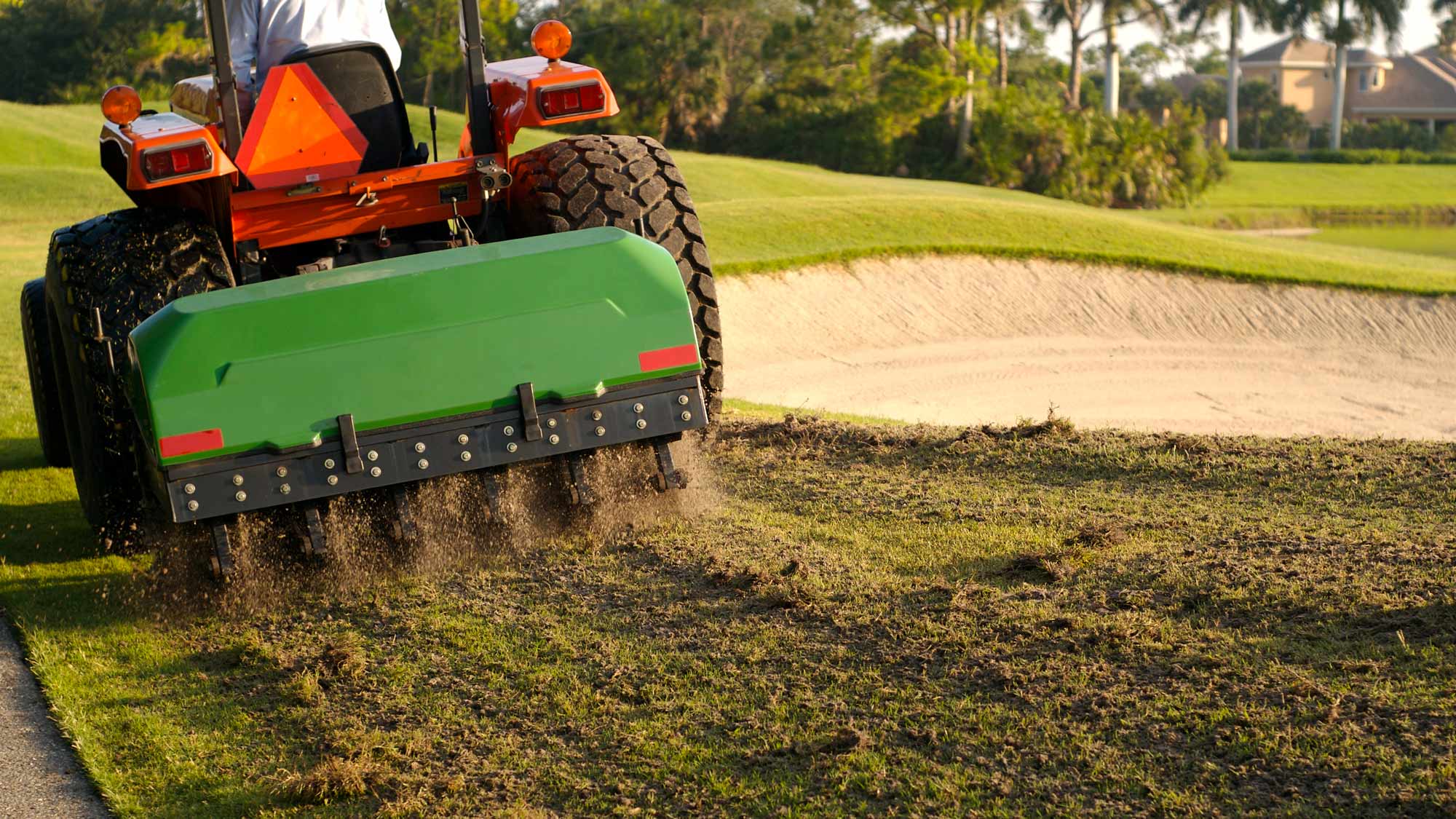 Many golf courses aerate more than just their greens.

So, should you aerate your own lawn?

“If I had all the time and money in the world, I absolutely would,” Nedrow says of solid tine aeration (core aerating and sanding a home lawn is, in most cases, going overboard). The fact that he doesn’t, doesn’t mean you shouldn’t. It can only help your lawn — especially on lawns with heavily compacted soil from frequent use — provided that you do it right.

The problem Nedrow sees with a lot of home aeration jobs is that the tines don’t go deep enough into the soil. People tend to use walk-behind machines with tines attached to drums that roll over the turf, poking holes that go no more than a half-inch deep. That might be good for breaking up thatch, Nedrow says, but the tines don’t penetrate down into the root zones, which means the grass doesn’t get the exchange of air and moisture that it really needs.

“You really want to aerify with machines that use a vertical, up-and-down motion that gets down into the root zone,” Nedrow says. But that simply doesn’t happen with most home aeration jobs.

Timing also matters. As a general rule, it’s best to aerify when soil temperatures get above 55 degrees for four to five days in a row. You can use a meat thermometer to take your readings. “Once you reach that threshold, that’s when you know your grass is really ready to get going,” Nedrow says. Just be sure to get those tines down into the root zone.

Not that Nedrow follows his own advice at home. He says there’s a common quip in the industry that if you want to know where a superintendent lives, look for the worst lawn in the neighborhood around July or August, because by then, “the superintendent will be so tired of taking care of grass that he won’t bother with his own.

Nedrow says he aims to be the exception. “I’ve got a neighbor who is pretty dialed in with his lawn, so there’s a bit of competition going on,” he says. “He doesn’t know it, but there is.”

How far Nedrow is willing to push that competition is another matter. Deciding whether or not to aerify is a calculus involving a range of factors, including time and money, how you want your lawn to look, and how you like it to be used. It is, in the end, a deeply personal matter.

“I take a ton of pride in my yard and I’ve never aerified it,” Nedrow says. “I guess my actions tell you what you need to know.”

A golf, food and travel writer, Josh Sens has been a GOLF Magazine contributor since 2004 and now contributes across all of GOLF’s platforms. His work has been anthologized in The Best American Sportswriting. He is also the co-author, with Sammy Hagar, of Are We Having Any Fun Yet: the Cooking and Partying Handbook.