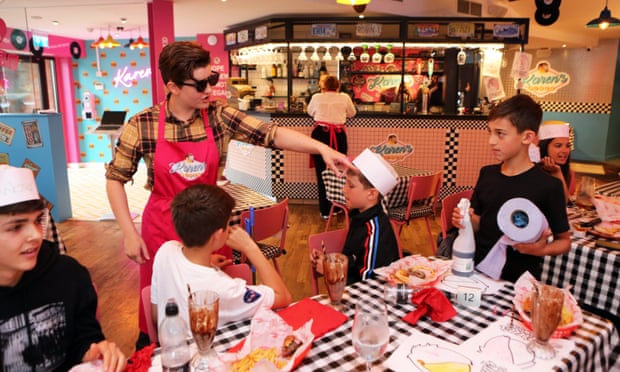 Masochism as entertainment has long been the 21st century’s stock-in-trade: Gordon Ramsay shouting at aspiring chefs; catty old Kevin McCloud comparing someone’s multimillion-pound Grand Design with a car showroom. Even in this #BeKind age, we remain hungry for ritual humiliation.

It was only a matter of time, then, before someone came up with the idea of a restaurant experience that aims to be as unpleasant as possible. Blame the Australians for Karen’s Diner, new to the UK, which advertises itself with the slogan: “We hate good service.”

Some journalists go undercover in despotic regimes. Others create elaborate identities to lure the powerful into corruption. My lunchtime task was to go incognito at Karen’s in Prestwich, a suburb of Bury in Greater Manchester once home to the late Mark E Smith, the Fall singer whose uncompromising rudeness was less of a gimmick than a way of life. Karen’s Diner would have represented everything Smith hated about modern life, where insults come from a script rather than the heart.

A member of staff makes child customers clean up at Karen’s Diner in Prestwich.

My cover story fell apart at the first hurdle when the scowling maitre d’ noticed the notebook sticking out of my coat pocket. “What’s that?” she barked. I stuttered an unconvincing reply. She directed us to table 22, the worst in the house, right by the toilets.

A waitress chucked menus in our general direction. Another brought us chefs’ hats crayoned with insults. Work experience student Hope, no doubt rapidly reassessing her career goals, received one reading “Tory”. Mine said: “I noshed Boris.” A woman strutted past to the loos with the confidence of a supermodel, perhaps forgetting she was wearing one saying “dopey slag”.

A surprising number of children were dining with Karen. Under-16s must be accompanied by adults, with the website warning “We are not Disneyland”, and to expect bad language. They’re not joking. In an hour we watched several boisterous primary school children being told to “sit the fuck down and shut the fuck up”. Three 10-year-boys looked thrilled. Their mums: less so.

Karen’s Diner was born in Sydney last year and is named after an internet meme that rose to prominence in the late 2010s. The name, a classic for 1970s babies, has become a shorthand for a particular kind of woman – white and humourless with an inverted bob that is longer at the front than the back – who is all too quick to ask for the manager. Those of us who know and love a Karen (sorry, sis) feel very guilty perpetuating the sexist and ageist stereotype, even if it comes with pretty decent burgers. 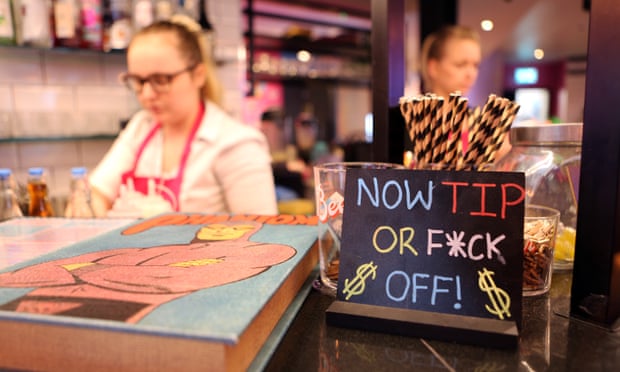 Service with a smile.

Karen’s is just the latest example of a hospitality venue that is more about the theatre than the food or the drink. Like Dans Le Noir, where London diners have been eating in the dark since the early noughties, or any of the crazy golf/axe-throwing bars so popular with stag parties, it is less for gourmands than exhibitionists.

The meanest looking waitress approached our table when we finished our burgers. Hope was ordered to spin a wheel of misfortune, a collection of dares. It landed on “Romantic Karen”, and she was made to go and use her best chat-up line on a tough-looking bloke wearing a hat saying “Budget Danny Dyer”, eating with his kids. The waitress then asked the dad how “hard” he was, on a scale of one to 10. She did not mean tough.

Staff then pretended it was my birthday. They serenaded me with an expletive-laden version of Happy Birthday and served me a shot of some sort of milky muck served in a miniature toilet, delivered with two middle fingers. The experience ended as it began: with breathtaking rudeness. I struggled with the door. “It’s push, not pull,” said a waitress. “Fucking idiot.”