Ever found yourself unexpectedly drinking expensive French wine in a restaurant while Edith Piaf's La Vie en Rose plays in the background? Or perhaps you've unintentionally parted with a hefty tip after being touched on the shoulder by your waiter? Oops. You might well have succumbed to two of the restaurant trade's sneaky ways to get you to spend more money without realising it.

And never are these subtle strategies more employed than during the holidays. Recent figures from the Post Office show that more than 40% of parents are worried about how much they are going to spend on family meals out during the summer.

So, while smart restaurant owners have a number of clever ways to boost their profits, learn their tricks and you could make considerable savings.

How much we spend on a meal hinges on the way the menu is presented. Everything – from the listing of the dishes to the language of the descriptions – has been designed to appeal to your senses.

While you would assume that we read a menu from left to right, studies show that our eyes gravitate toward the upper right-hand corner first. This is often where the "anchor" – or the most profitable item – is located.

But this particular ploy is more cunning than simply getting you to buy the most expensive dishes: typically, having this usually quite costly dish listed will make everything look reasonably priced in comparison.

"Having an outrageously expensive item is both likely to get publicity for a restaurant, and will also get people to spend more," says Charles Spence, experimental psychologist at the University of Oxford and co-author of The Perfect Meal: The Multisensory Science of Food and Dining.

"People think 'I wonder if anyone ever orders that?', without realising that its true purpose is to make the next most expensive item seem cheaper."

Conversely, research suggests that diners look at the bottom left of a menu last, so this is where the least expensive dishes will be positioned.

Even the way the food and drink is listed can subconsciously influence our spending.

Many diners will order the second least-expensive bottle on wine in an attempt to avoid looking cheap. Knowing this, restaurants place the highest markup on that very bottle.

Diners on a budget will often scour the menu and choose one of the three cheapest dishes, but the restaurant industry is fully aware of this and takes steps to ensure bumper profits.

"Restaurants will centre-align a list to make it more difficult to compare prices," says Spence. "If you right-justify items, customers can more easily compare and will be less likely to go for more expensive items," he says.

And watch out for those pound signs – or lack of them. A study from American university Cornell found that guests given a menu with only numbers and no currency symbols spent significantly more than those who received a menu with prices either showing currency symbols or written out in words.

According to Gregg Rapp, a California-based menu engineer, the use of photographs and illustrations is also a large order driver. "Using a picture can increase sales of an item by as much as a third when there is just one photograph on the page," he says.

Spence explains that, from the moment of arrival, the sensory impact of every aspect of the dining experience is considered by the restaurant – from the colour of the plates to the shape of the glasses.

What's more, he points out that restaurants will adjust the genre of their music to influence spending habits.

"If a restaurant is selling both French and German wine, but the French bottle happens to be much more expensive, playing French music will likely bias the diner toward buying the more costly wine," he says.

This is backed up by research from the University of Leicester, which found that playing classical music, associated with affluence, encouraged spending, while a lack of music caused diners to spend drastically less. 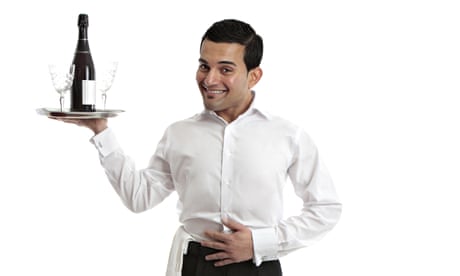 Many waiting staff are far from innocent when it comes to manipulating your dining experience. A good server knows the importance of the "up-sell" – or getting a customer to spend more than they originally intended. This also makes for bigger tips.

"The strategy of verbally listing specials, typically without mentioning price, is likely to increase spending," says Spence. "This is because most people are too embarrassed to ask in front of others."

Similarly, listing wines in a certain order encourages diners to choose a more expensive bottle. According to a report published by website Rue89, in which Parisian servers admitted to the tricks used to inflate customers' bills, this relies on the fact that the customer is unlikely to remember the first two choices and, so as to not look rude, will not ask to have them repeated.

Servers who keep filling your glass may be trying to sell another bottle by timing it so that the bottle is empty in the middle of the meal, so you are likely to order another.

And have you ever noticed that restaurants and other eateries (Cafe Rouge, Little Chef and Burger King, for example) often feature red on their uniforms? It turns out this could be about more than just an eye-catching design. Even the way the server acts toward you, their gender and what they wear can influence your spending.

"People have been shown to tip women wearing red more, to tip more if the server draws a smiley face on your bill, or if they touch the person paying bill on their shoulder," says Spence. "This is the so-called Midas touch effect."

As if that's not enough to be going on with, there are other tricks used by the catering industry.

For instance, you know those complimentary olives and tortilla chips offered by many high street chains? They were not set in front of you as a kind gesture, but rather as a way to ensure that you order more drinks as the salt makes you thirsty.

Don't be fooled into thinking that the "specials" are that special as, typically, these dishes are made from leftover ingredients, or food that is set to expire soon.

This doesn't mean they will necessarily be any cheaper as they often cost just as much as a regular-priced meal.

The whole idea of "prix fixe" or the "combo" meals in fast-food restaurants is that, for a given price, it is harder to compare the value. "Many restaurants do small plates for sharing – by ordering several different dishes, you end up spending more," says food writer Sejal Sukhadwala.

"When selecting a number of small dishes to share, don't get carried away. Always under order: you can always ask for more afterwards." 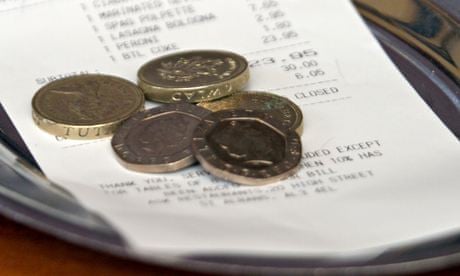 Before tipping your waiter, check whether a service charge is included. Photograph: Alamy