For those of you who haven’t heard the exciting news, Patti Varol has taken over as the new editor of the LA Times, with Christina Iverson as assistant editor! They’ve just released their updated submission guidelines and pay rate, which can be found in her recent Tweet. Check it out!

Right off the bat, there’s something interesting about this Sunday NYT’s grid layout and mysteriously enclosed five-letter entry toward the bottom. Let’s see what our constructor has in store: 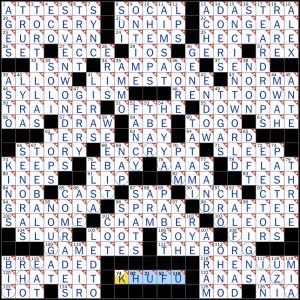 – Circled letters (in the shape of a pyramid): THE GREAT PYRAMID OF GIZA

Wow, a tribute puzzle to the Pharaoh buried in THE GREAT PYRAMID OF GIZA. That certainly wasn’t on my bingo card for puzzle themes, but I enjoyed the art of the construction and appreciated learning about KHUFU, whom I hadn’t heard about before. While the structure of the puzzle was neat, I’ll admit to being lukewarm on seemingly random / shoehorned “theme” entries like THREE (when there’s only one shown in the grid), LIMESTONE, and TRACT. Even still, a puzzle that revealed itself across multiple layers, which is always fun.

Other random thoughts:
– 13A: AD ASTRA [Motto meaning “to the stars”] – My husband is from Kansas, where the state motto is “Ad astra per aspera,” which I’m told translates to “To the stars through difficulties/adversity” – I’ve always liked the poetic growth mindset of that aspiration.
– 3D: TORTILLAS [They wrap things up] – One of my favorite ways to eat leftovers (especially any kind of chicken, stew, or curry) is to make a burrito with it and some rice the next day. Mmmmm.
– 40D and 41D: LYRA and LIRAS – Do these come from the same etymology, I wonder?
– 66D: SENORAS [Mujeres con esposos] – …o con esposas, claro!

That’s all from me today. I hope you’re doing well! To those of you traveling to Stamford next weekend for ACPT, have a great, safe time! I’ll be sad to miss y’all, but I can’t wait to hear all about it.

Theme: Familiar phrases have one letter changed from an I to something else for wacky effect. Collectively, the new letters spell an apt phrase.

Nice. I didn’t quite get a chuckle out of any of these, but they all work well enough, and the variety kept my interest throughout. I didn’t bother trying to find the secret message (“COUNT ME OUT!”) until I finished, but it was a nice cherry on top and perfectly apt given the title. Very well constructed.

Looking elsewhere I spy MOTHER HEN, ICE HUTS, HEAD TRIPS, DELI MEATS, and KIDDO as strong ASSETS to the grid. Nothing really triggered the scowl-o-meter except maybe the dupe between “HI, ALL!” and WAVES HI and the odd bit of crosswordese (IDED, SRIS, OSSO).

Forgive me for not knowing GELT [Hanukkah treat]. Why do I think it’s some kind of fish? Maybe because I’m conflating gefilte and smelt. But the word means “money” and refers to the chocolate coins given to children during the holiday.

I also didn’t know TAMIA [“Beautiful Surprise” singer]. You can check it out here.

A strong grid. Four stars from me.

THEME: Films that sound as if they are shoe-ins for an Oscar. 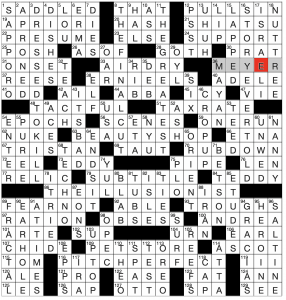 Had no clue it was Oscar Night tonight. Figured it had to be with this theme. I think the only contender I saw this year was Power of the Dog, which was pretty darned good.

Anyway, solid puzzle today with a lot of bite in the clues (for me anyway). My time clocked in somewhere around the 15 minute mark, but it felt like it took me much longer. It was tough to find a solid foothold in the NW as I needed crosses for PRIORI, SAPPORO, SADDLED, ERMA, REESE, PRESUME. Had trouble defining the word DISHES as anything other than a physical ceramic plate, so that didn’t fall either.

Didn’t fully read the clue for THE GREATEST STORY EVER TOLD, so I thought initially it was just THE GREATEST… which seemed awfully vague for a specific award. I mean, THE GREATEST should just win all the awards. No fancy ceremony necessary.

Somewhat surprised that there wasn’t a Birnholzian layer having to do with combining a featured letter of each themer. Man, Evan’s constant solvers are pretty pampered when we notice that we don’t get the added layer.

The new-for-me-names that weren’t much present in last week’s puzzle showed up en force today: Aforementioned ERMA and REESE, but also Nicholas MEYER, LEN Wiseman, ANDREA Riseborough, ANN Dowd, DEB Haaland (though I should’ve known that), THEO James… and I feel like I’m missing some others.

Anyway, that’s all I got for today! Enjoyed it 🙂

Theme: Each theme answer is composed of three words with the first letter of each spelling out DOW.

I thought that was a relatively simple theme. DROP OF WATER was clued particularly well, and DEAD OF WINTER was a fun and easy one to include. DAY OF WORSHIP too was pretty effective and easy to fill in, especially once I had the W out of 54d [“Property tax payer”] OWNER. Part of me does wish that OF wasn’t the connecting word in all three of the answers, but it ALSO does maintain consistency.

This felt like such a refreshing and easy Sunday to scoot through. From BODEGA, ISRAEL, and ACORNS, to HOME, I BET, and PANS. It was a really smooth flow from clue to clue, and I felt like it came together nicely. I learned a lot from 18a [“like some qipao patterns”] in FLORAL to 14d [“Aizhai Winding ___ (scenic route in Hunan)”] ROAD. In general, a really fun, nice Sunday puzzle. 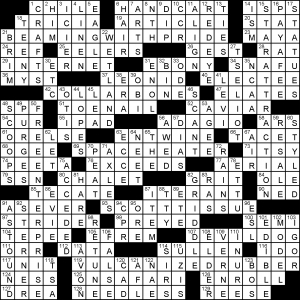 Gary Larson & Amy Ensz together make a Star Trek (predominantly TOS) pun theme featuring seven non-Trek phrases reimagined as being about the show. Most of them landed better than average for me, though with some obvious filler. We have [Satisfied with on’es working in the transporter room], BEAMINGWITHPRIDE; [Detain Dr. McCoy], COLLARBONES (above LEONID, almost LEONARD); [Phaser, slangily?], SPACEHEATER; SCOTTTISSUE, [DNA sample from Kirk’s chief engineering officer?] (those last two the weakest); VULCANIZEDRUBBER, [Masseuse trained in massage techniques from Spock’s home planet]; [Allure of boldly going where no man has gone before?], STARATTRACTION (using TOS version of the quote); [Happy Meal toy replica of Captain Kirk’s ship?], FREEENTERPRISE.

My error was not knowing [Miles’ “Sideways” love interest], MAYA and deciding the weirdly phrased [Pony up the service charge, say] was PADAFEE? As in inflate the fee? Made as much sense as anything at the time…