A bunch of Atlantic City casinos closed last year; they were victims of the profusion of gambling spots on the East Coast and made ugly headlines in the process. But golf in and around the Boardwalk City is stronger than ever, with several previously private courses now available for public play and aggressive pricing at nearly every venue. Some 18 courses—parkland and links-style, seaside and Pine Barrens, classic and wildly modern—are just a short trip down the shore. We sampled a half dozen and came away delighted.

Vineyard Golf at Renault is one of many excellent golf opportunities within a few minutes of Atlantic City. With a fine hotel, restaurant, and namesake winery, Renault Winery Resort is actually a worthwhile destination of its own.

The unique 7,200-yard golf course was designed by architect Ed Shearon and features intriguing views of the vineyards as it meanders through the Jersey Pinelands. Every hole seems to offer risk/reward opportunities and thoughtful strategic elements. Wide fairways are inviting but reward the well-placed tee shot. Fairway bunkers and water are in play often enough to provide some variety, and the undulating greens place a premium on an accurate approach game.

The owners of Renault Winery Resort created the golf course 11 years ago, but the winery itself dates back to 1864. In addition to a small European-style hotel, Vineyard Golf at Renault features a gourmet restaurant, a historic winery building offering tours, lavish banquet rooms for weddings and celebrations, and, of course, a golf course that is as fine as the wine.

Shore Gate Golf Club is one of the many underappreciated golf opportunities on the Jersey Shore. Since it opened in 2002, it’s been named to numerous “best of” lists, which is completely understandable once you play the demanding, scenic layout that winds through the pine forests of Ocean View, New Jersey. Daily fee (and membership) rates are reasonable, the golf is good, and there are plenty of amenities to add to your experience, including Atlantic City just 30 minutes away.The course was designed by Ron Fream and David Dale and built on 245 acres with plenty of dramatic elevation changes and rolling terrain. The architects mixed features of both parkland and links-style golf to make things interesting. Fairways are tight, greens are expansive, and you’ll find plenty of water and sand to challenge your game. There are 88 bunkers on Shore Gate (as well as seven ponds and lakes), making even the shorter holes a test of your game.

Among the other golf pleasures of Shore Gate is the practice area with multi-tiered driving range (with both bent grass and artificial tees), a huge putting green, and a practice bunker.

Formerly private but now public, Ballamor offers a wonderful golf experience within a few miles of Atlantic City. The 7,098-yard course has a strong Pinelands feel, with routing through and around environmentally sensitive wetlands on a huge 350-acre piece of property without a home in sight. The architect, Dan Schlegel, then of Ault, Clark & Associates, moved a great deal of earth to create rolling terrain out of what was originally a fairly flat and featureless pine forest. The result is a manicured and highly playable golf course.

Ballamor opens with a fairly benign 522-yard par five (from the 6,681-yard blue tees) that, like much of the course, features wide fairways and a green to match. One of the most interesting holes on the course is the 15th, a 347-yard par four with a mentally challenging tee shot. Water is your first test, but then comes the real choice: you can carry the massive bunker on the left corner of the dogleg with a 220-yard drive or play it safer to the right, leaving a long shot with bunkers everywhere in sight. 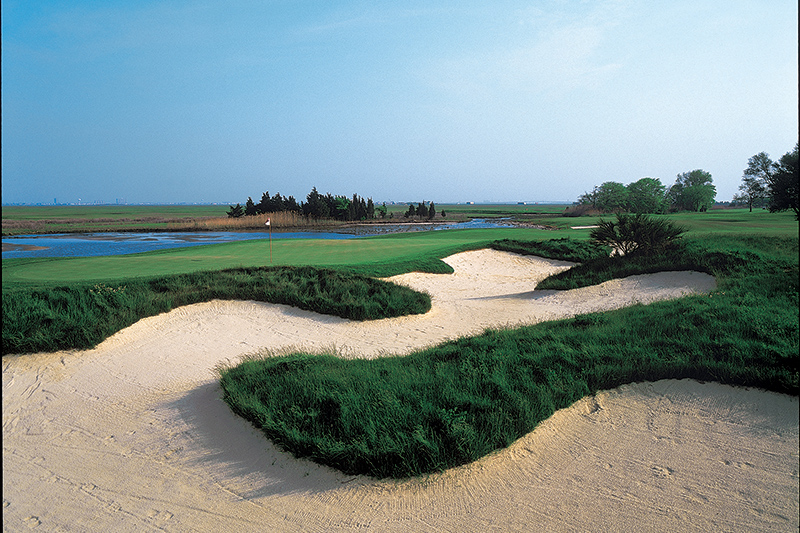 It’s easy to see why the Atlantic City Country Club has been a favorite of pros and amateurs alike during its 118-year history. Strategic, scenic, tradition-laden—you name the positive golf adjective and it applies in spades. The club has hosted six national USGA championships, and its fairways have been walked by everyone from Babe Didrikson Zaharias and Sam Snead to Nancy Lopez and Arnold Palmer. The easy-to-say and hard-to-get term “birdie” was coined here, as was “eagle,” at least according to local lore.

Small greens and big bunkers define the ACCC course and make it a strategic pleasure (or pain) to play. While sandy soil and wind are prevalent conditions, it’s not a links course. You can certainly use a good ground game; it often pays to keep your ball under the wind, but flying the ball into most greens is your best choice. Besides, the voracious greenside bunkering often makes a high, soft approach necessary unless you’re in the one perfect position in the fairway to run it up.

The grill and locker rooms are a treat for lovers of golf memorabilia. Take a few minutes to check out the photos of the many greats who played at ACCC over the years including a twinkle-eyed Arnold Palmer in his Coast Guard uniform from 1951. Stop, too, at the great bell hanging just outside the clubhouse entrance and imagine the rush of jolly golfers responding to its call signaling the last trolley back to Atlantic City. The club still rings it at the end of each day to invite you to “play a round with history.” 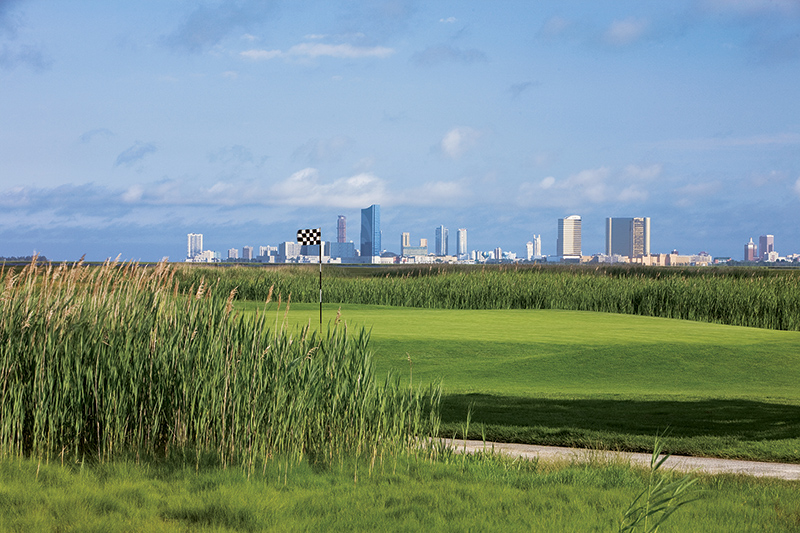 The world’s top women golfers compete, but the real star of the show may well be the Seaview Bay Course, a 6,366-yard Donald Ross design that tests both pros and amateurs. The track is one infuriating short hole after another, with wind, wind, wind, and more wind pushing your ball away from the tiny greens. The course underwent a renovation last year to celebrate its centennial, but it didn’t lose its traditional feel despite adding new tees on four holes and refreshing some of the bunker complexes. It’s still seaside golf in all its glory.

A hundred years of golf history at Seaview are reflected in the wooden bunker rakes and flag sticks, not to mention the many crowned greens with approaches that reward an effective bump-and-run ground game and a careful reading of putts. In an earlier, gentler time, Warren G. Harding played the course, and Sam Snead won his first major there: the 1942 PGA Championship. Seaview is also home to the Pines Course, a parklands course that’s a little longer but just as intriguing as the Bay Course.

Everything at Running Deer Golf Club is oversized. The fairways are collections of large mounds surrounded by impossible ravines, monstrous bunkers, and encroaching trees—sometimes all on the same hole. The greens were contoured with a heavy hand, too, so that even if you can reach them in something near regulation, you’ll have a tough two-putt to come close to par.

But then, what else would you expect from an oversized owner like ESPN personality and Philadelphia Eagles Hall of Fame quarterback Ron Jaworski? Running Deer is one of several golf properties the sports star has collected under the umbrella of Ron Jaworski Golf Management. Among them are Valleybrook Country Club and Blue Heron Pines, both in New Jersey. Running Deer is his most recent acquisition.

Running Deer measures 7,100 yards from the tips and 6,400 from the more-reasonable white tees. There are a few forced carries, but length isn’t as necessary as accuracy on almost every hole. Consider club selection carefully, especially on the short par fours. And bring an extra sleeve of balls, too, since several holes have water and/or tangled rough not far off the fairway.