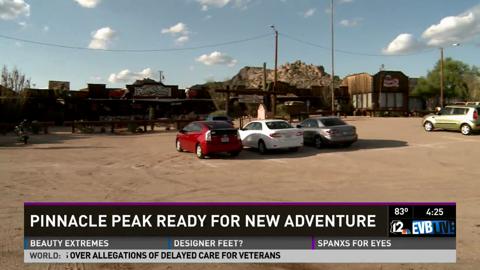 A look inside Pinnacle Peak Patio in May 2014

At that time the owners had planned to move to a new location.

Another one of Scottsdale's authentic Western locations is heading into the sunset.

Pinnacle Peak Patio, the iconic Western steak house with its thousands of ties that hang from the ceiling, has sold its property, joining Greasewood Flat and Rawhide in what soon will be history.

Each is continuing, or at least planning to continue, elsewhere.

Combined, the businesses for years helped Scottsdale lay claim to its motto, "The West's Most Western Town."

"This is not something we're glad about," Mayor Jim Lane said. "We've been talking to them for two or three years about their future."

He said the city is working on the possible relocation of Greasewood Flat, and he hopes Pinnacle Peak Patio can survive as well.

Rawhide has operated on the Gila River Reservation south of Phoenix since 2006 after shutting down and selling its north Scottsdale location at Pinnacle Peak and Scottsdale roads.

The Cavalliere family, owners of Greasewood Flat and Reata Pass, has announced plans to move to family-owned land near the Tom's Thumb Trailhead south of Rio Verde Drive at 128th Street. Their land, north of Pinnacle Peak Patio on Alma School Parkway, was sold in probate court last year.

The new buyers, led by developer Michael Lieb, are keeping the restaurant open for now. The McElhanon family can operate it rent-free until Lieb, who anticipates building luxury houses, is ready to proceed with development of the 10-acre site. He said he has no time frame for developing the site.

The property was sold for $2.4 million, about $55,000 an acre more than the Greasewood Flat acreage.

Councilman Bob Littlefield said Scottsdale "has a land-rush mentality" that led to the demise of places such as Pinnacle Peak and Rawhide.

"Developers think they should get in while the council is giving away goodies," he said. "Pretty soon, Scottsdale will be just another bland suburb."

Pinnacle Peak Patio started out in 1957 as a small store that sold beer and bait to fishermen traveling to nearby lakes. The original owner, wanting to increase sales, offered a simple steak dinner consisting of a 32-ounce Porterhouse steak cooked over mesquite wood. Its reputation grew as a place known for snipping off the necktie of anyone who dared enter its doors dressed so formal.

But, she said, the sheer size of the place, combined with changes in the business climate over the years, made it difficult to continue.

Joined by her publicist and marketer, Lisa Cyr, McElhanon said business remains good, just not as good as the days before Alma School bypassed the restaurant and million-dollar homes and resorts populated the area.

The restaurant can seat up to 2,000 people. Rare are the days that it is full, Cyr said. Group business, always a big part of the restaurant's success, has declined. The events keep coming, but Cyr said instead of several hundred showing up for dinner at the group outings, usually fewer than 100 are taking part.

The real problem, they said, is the size.

"If the restaurant was smaller," McElhanon said, "business would be amazing."

"The family recently decided it was time," Cyr said. "It was in the process of being sold several years ago, but that fell through."

A restaurant move would necessitate taking all of the more than 1 million neckties that have been cut from customers over the years, a practice started by the original owner, as well as old license plates, art work, historical memorabilia and other items.

"We'd like to stay in Scottsdale," Cyr said. "We feel it is important to keep the legacy going. People have come here since they were kids."