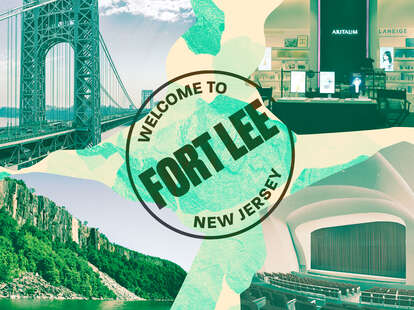 Located on the New Jersey side of the George Washington Bridge, there are many reasons to visit the unassuming suburb of Fort Lee, New Jersey: It was once known as the film capital of the world, has a 33-acre park with cliffside hikes, and more recently, a simple crossing over the Hudson River offers New Yorkers some of the best Korean food around outside of Manhattan and Flushing.

A (very) brief history: Named for a military encampment site in the American Revolutionary War, Fort Lee transformed into a bustling film mecca in the early part of the 20th century, housing the country’s first permanent film studio in 1910 (just a year later, 11 major studios were in town). The arrival of the George Washington Bridge in 1931 placed the town front and center, with its connection and proximity to NYC. Thus opening the doors to a steady stream of newcomers—chief among them at present, Korean Americans.

While Koreans have lived in Fort Lee since the 1970s, Fort Lee saw a rising influx of Asians (42% of inhabitants currently identify as Asian) starting in the 1980s and 1990s, and more particularly Koreans—who now constitute nearly 25% of its population.

Initial attractions to Bergen County (which has the highest percentage of Korean Americans of any county in the U.S.), and in particular Fort Lee, included the easy commute into Manhattan and a suburban setting with NYC in its backyard. Koreans have since opened hundreds of businesses in the area (as far back as 2000, there were already 130), resulting in a flourishing, multi-ethnic community that has thrived. But the recent and rising levels of extreme violence against Asian Americans have tragically affected all parts of the U.S., including New Jersey—and notably, Koreans, who are among the second-largest ethnic groups to report having experienced hate.

Barely a half-hour drive via the FDR and I-95, Fort Lee is an easy ride by car from NYC, and there’s also frequent bus service from the Port Authority Midtown Bus Terminal. As always in these times, please mask up and social distance responsibly—and most of all, continue to be respectful, generous, and kind.

The History of the McRib

The Korean food (and other dining options) are amazing

Upscale Korean-style steakhouse, Prime & Beyond, also has Korean fried rice, kimchi, and soybean stews on its menu. Hannam Chain, a grocery store franchise which offers everything from Asian groceries to hardware, also has a mini food court inside worth a visit. Sa Rit Gol isn’t just a place for classic Korean dishes, but is a community spot where golfing dads and millennials alike sample the excellent stews and jokbal (pig’s trotters).

More stews (and jokbal) can be found at Gajma Tang Tang, a playful take on the Korean words for potato stew. Korean comfort food is beloved at Sik Gaek Gugu (the original location in Queens, featured on Anthony Bourdain’s No Reservations, has now closed), known for its donkatsu (deep-fried pork cutlet) and ddukbokki, a Korean rice cake dish. BCD Tofu House—with 13 locations coast-to-coast—has a variety of spicy tofu soups, from soybean paste to kimchi to pork to seafood.

Other worthy spots (non-Korean) include Soupdumplingplus, a go-to for Chinese soup dumplings; Soba Noodle Azuma for soba noodles, cold and hot udon noodles, and Japanese appetizers (the restaurant’s staff is Japanese as well); Aquarius for authentic Chinese dim sum and Cantonese specialties in a modern space; SunMerry Bakery & Cafe for cream puffs and other Chinese bakery items. And last but not least, Hiram’s, a local roadstand spot that’s been a favorite for burgers and deep-fried hot dogs since it opened in 1932 (and is now featured on N.J. native Anthony Bourdain’s Food Trail).

Social distance at a 33-acre cliff-top park, or cycle, bike, and boat

Fort Lee Historic Park, part of the historic Palisades Interstate Park Commission (which covers over 100,000 acres), is a 33-acre cliff-top park area with spectacular scenic views. An abundance of wildlife exists within the park, from blue-claw crabs and bald eagles to red and gray foxes, white-tailed deer, reptiles, and amphibians, in addition to an array of plant species. The Palisades Interstate Parkway also features a scenic 42-mile ride, stretching from the George Washington Bridge in Fort Lee to the New York state line at Alpine.

Visitors can partake in a whole slew of activities at this historic national landmark. Canoes and kayaks can be launched at Bloomer’s Beach, in addition to multiple picnic areas. Boaters can make use of two public boat basins and a public boat ramp, for larger boats and jet skis. Cyclists can enjoy Henry Hudson Drive, the 7-mile scenic roadway. Fishing and crabbing are allowed along the park’s riverfront picnic areas and the length of the Shore Trail.

With over 30 miles of trails in the park, there’s plenty of terrain to explore too, like Carpenter’s Loop—a 5.5 mile hike that begins and ends in the Fort Lee Historic Park, along with other easy riverside strolls and more challenging rock scrambles. Barbecues are welcome at the park’s four riverfront areas, while picnics are permitted at all areas of the developed park. (In the winter, five miles of cross-country skiing trails open up, and skiers are even permitted to enjoy the hiking trails.)

It’s said that Thomas Edison invented the world’s first movie camera in New Jersey in 1907, so perhaps Fort Lee’s reign as the nation’s first epicenter of filmmaking isn’t such a surprise: The first studio built and operated by a woman, Alice Guy Blaché, was established in Fort Lee (1912, Solax). It’s where the first horror film, Dr. Jekyll and Mr. Hyde, by Universal Studios was shot (1913). The Marx Brothers appeared in their first film here (1922, Humor Risk). The first African-American “talkie” was shot by pioneering African-American filmmaker Oscar Micheaux at Metropolitan Studios in Fort Lee (1931, The Exile). And it’s where the term “cliffhanger” was born.

While those cinematic spotlights have long faded, the Barrymore Film Center, which is dedicated to celebrating Fort Lee’s roots as the birthplace of the American film industry, is slated to open in late 2021. The 250-seat theater (built by the Borough of Fort Lee and operated by the Fort Lee Film Commission) will host major film retrospectives, foreign film screenings, film festivals, and museum exhibits, as well as showcase emerging filmmakers.

Until then, get your film fix with a trip to IPIC Theaters, where you can enjoy dinner-and-a-movie (literally, with their wine-and-dine in-theater menu). They even screen old-world Hollywood classics like the upcoming To Kill a Mockingbird and Citizen Kane.

Swathi Reddy is a Louisiana-born, NYC-based freelance writer and marketer. Formerly a Food & Wine staffer for over a decade, she can't think of anything better to do in life than talking about food while eating food. Except maybe discussing cocktails (or wine).