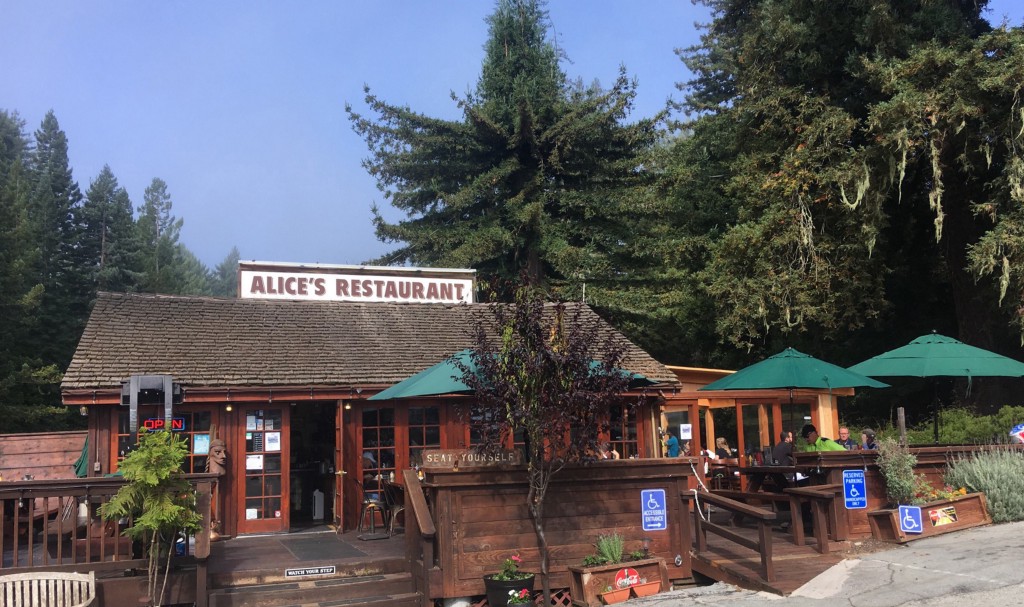 Roadhouse views: Alice’s Restaurant at the intersection of Skyline Blvd and Highway 84 is an institution beloved by locals and tourists alike. (Photo by Kate Bradshaw)

The monthly breakfast at Alice’s Restaurant lures folks in from far and wide…and no one leaves hungry.

On the first Wednesday of every month, dedicated pilgrims, from nearby and as far away as San Jose and San Francisco awaken in the early hours to journey by foot, bike, motorcycle and car to the redwood groves and fog-shrouded hills of Sky Londa.

Their destination is Alice’s Restaurant, a local institution that dominates the intersection of Highway 84 and Skyline Boulevard. According to local lore, the building was once a general store and has been a restaurant since the 1950s. It was purchased about a decade later by a woman named Alice Taylor, who named the restaurant after herself and the famous Arlo Guthrie song. It’s been family-owned and operated since the 1970s.

These weekday travelers are headed for the restaurant’s unique monthly all-you-can-eat buffet breakfast, which, for a price of $10 between the hours of 8 and 9:30 a.m., permits visitors to eat all the eggs (scrambled and fried), potatoes, sausage, bacon, pancakes, french toast, coffee cake, fresh fruit, oatmeal and coffee they can.

Andy Kerr, co-owner of the restaurant, explains that he and Jamie, his brother and fellow owner, started the buffet back in 2008 during the financial crisis. The restaurant had seen a decline in visits from locals, some of whom had lost their jobs and had little money to spend eating out, he said. To show appreciation for local customers, the restaurant launched the monthly breakfast buffet at $5 per person, but since then, the restaurant has had to raise prices to $10 cover the costs.

Word of the monthly affordable breakfast spread, especially within the cycling community. Though the financial crisis has since ended, the monthly breakfast has taken on a life of its own, luring as many tourists as locals. While that means long lines some months, it’s become a valued ritual for neighbors and pilgrims alike. 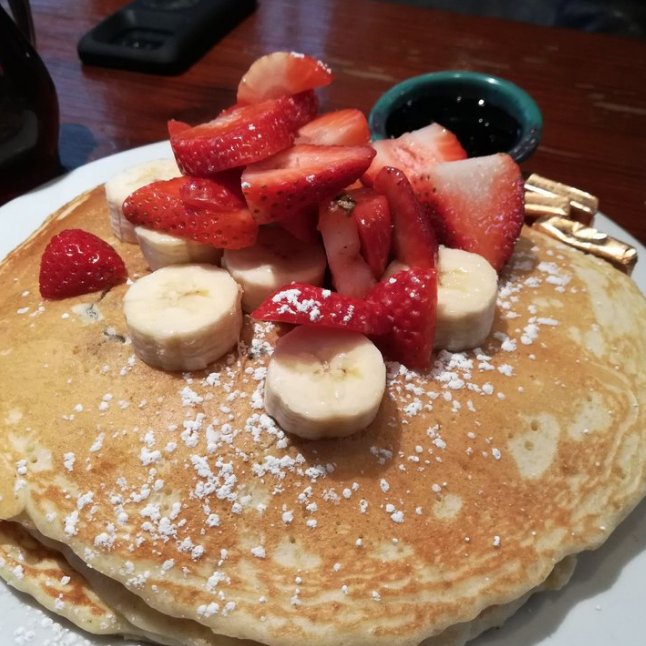 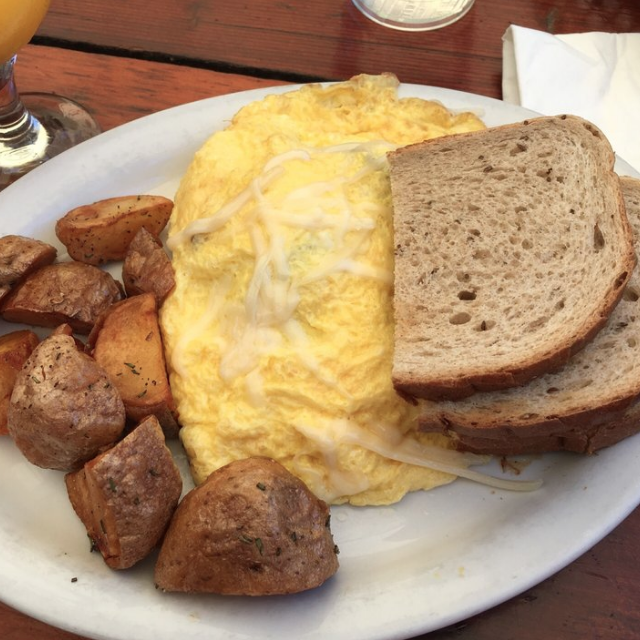 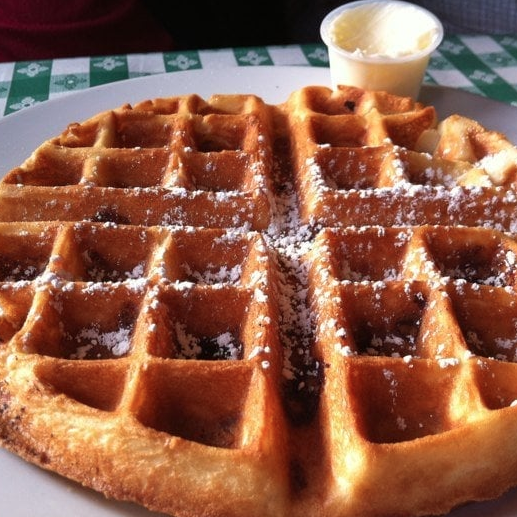 Appetizing options from the monthly brunch at Alice’s (and you can have as much as you want!!!). (Images via Yelp)

Amid a bustling restaurant, Alice’s August breakfast was fairly quiet. In busier months, the line for the buffet often runs through the parking lot, Kerr said, especially when Stanford is in session and locals aren’t out on vacations.

Carrie German, a Kings Mountain resident, said she’s been coming to the breakfast every month for years. “It’s an island of serenity in your hectic life,” she said. “Even when it’s packed, it’s still nice.” 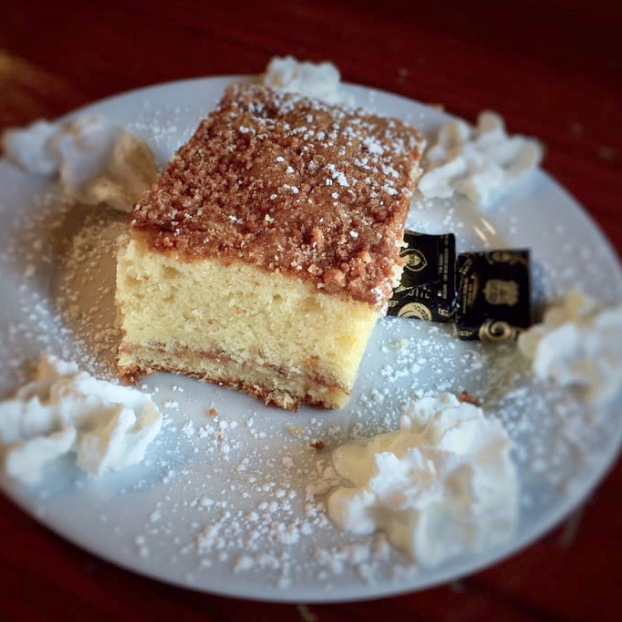 Don’t sleep on the coffee cake. (Image via Yelp)

Vicki Atkins and Cliff Hudson of Woodside are also dedicated regulars. Hudson said he’s been coming to the restaurant since the 1960s, ever since he got back from Vietnam and was looking for a friendly place to meet people. Atkins said she has been a member of a women’s group that has met each Tuesday night at Alice’s since 2011. They have a table reserved in the back, and each week, between five and 12 women meet there to spend time together and enjoy each other’s company, she explained.

Residents of the Santa Cruz Mountain foothills in Woodside, Kings Mountain and Sky Londa rely on Alice’s for food in particular, especially if they forget to plan ahead for dinner. With the nearest grocery store 20 to 25 minutes away, explained Sky Londa resident Tim Johnson, Alice’s often serves as the nearest food source.

But the dedicated locals tend to stay away on weekends when it gets, as Clair Johnson put it, “enormously busy.”

As the Johnsons’ friend Joe Rockmore explained with a Yogi Berra quote: “Nobody goes there anymore; it’s too crowded.” 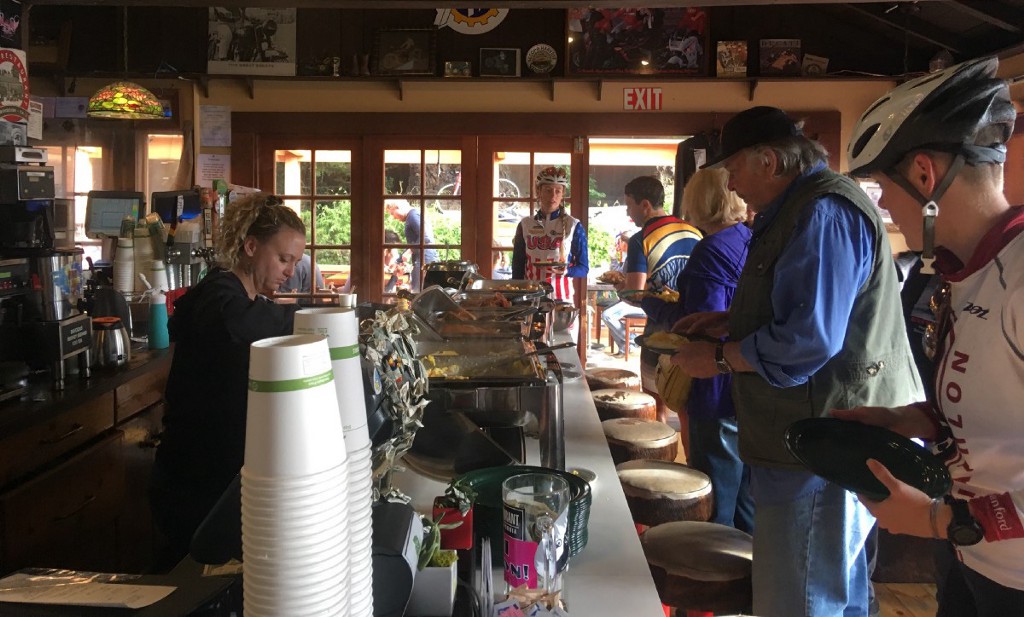 Even though Stanford isn’t in session yet, a number of helmeted young adults wearing Cardinals cycling shirts were observed lining up for and later digging heartily into the breakfast offerings. Cyclist Noah Young said he planned to continue his bike journey another 80 miles, riding past Alice’s to Bonny Doon in Santa Cruz County and back through Big Basin. 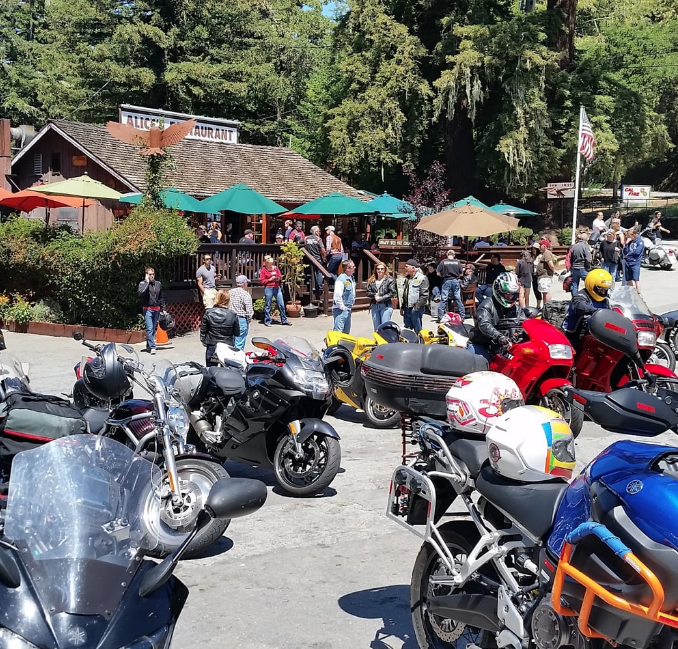 The weekend scene at Alice’s. (Image via Yelp)

Generally, though, the ride to Alice’s is considered more of a social activity than a training session for Stanford cyclists, explained cyclist Cody Stocker. Riders Catherine Kircos and Joshua Wise, who said they consider themselves friends of the team, planned to ride back down the hill toward the campus after breakfast.

Motorcyclists also frequent the restaurant, as it’s located at the nexus of a number of desirable roads for riding — those that are curvy, twisty, well-paved and have minimal traffic, explained San Francisco resident and biker Michelle Tilley. Tilley was meeting with several friends at Alice’s for breakfast before heading out for more riding.

Even out-of-towners without wheels, though, have made Alice’s breakfast buffet a monthly tradition. A group of hiking buddies with residents from San Jose, Cupertino and North Fair Oaks has been making the hike from Wunderlich Park to the restaurant monthly for about a decade. They gather monthly at Wunderlich Park around 6:30 a.m. the morning of the buffet to begin the four-mile hike to the restaurant.

“The smell of bacon pulls us up,” joked hiker Mark Folden, a San Jose resident who, at 78, says he’s the senior member of the hiking group. 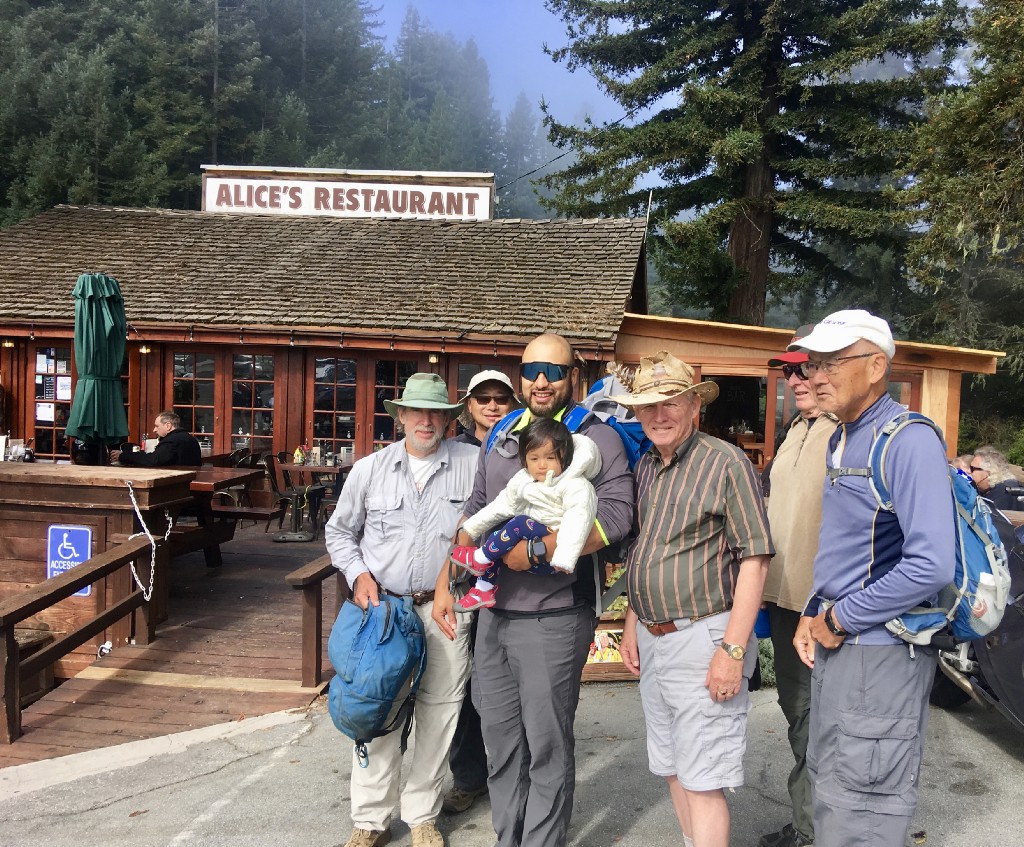 A group of hikers says they’ve been making the trek from Wunderlich Park to the Alice’s breakfast buffet and back once a month for the better part of a decade. (Photo by Kate Bradshaw)

Bob McKibbin, a retiree from Cupertino, said he is a dedicated hiker who collected the group of hikers based on existing associations — his brother Mike and brother-in-law, Bob Yasukawa, are participants — as well as looser connections that have become deeper friendships. He started hiking with Mark Folden, his wife’s friend’s husband, after their wives pointed out their shared interest in hiking, and found fellow hiker Howard Lee after he responded to an ad on Craigslist looking for a hiking buddy. They trek all over the region, but reserve the first Wednesday of each month for their hike to Alice’s.

North Fair Oaks resident and former community councilman Rafael Avendano is also a regular with the hiking group, and brought his 10-month-old daughter, Alana, on the trails for the first time to the August breakfast. He said he’s been hiking with the group for about six years, and considers the older men he hikes with to be wise mentors. On their hikes, they talk about politics and offer financial advice, he said.

“Now my daughter is learning from them,” he said. “It’s great being a part of this.”

With a happy fistful of scrambled eggs and a comfortable seat in a baby backpack, she too, appeared to be enjoying her breakfast excursion.

Alice’s Restaurant is located at 17299 Skyline Boulevard in Woodside. Call the restaurant at (650) 851–0303 or visit its website, alicesrestaurant.com. Outdoor seating is dog-friendly. The restaurant also offers live music on Thursday evenings from 7 to 9 p.m.

To hike to the restaurant, here’s a trail map for the eight-mile hike to and from Alice’s from Wunderlich Park via AllTrails. To get there by bike, here’s a map of a recommended cycling route, a 19-mile loop, via bayarearides.com.

Stay up to date with other coverage from The Six Fifty by subscribing to our weekly newsletter, featuring event listings, reviews and articles showcasing the best that the Peninsula has to offer. Sign up here!