In the history of tortilla-swaddled dishes, the taco al pastor is a young’un. Yet, despite being only about sixty years old, it’s considered an iconic Mexico City dish. And it’s the namesake of El Pastor Es Mi Señor in San Antonio.

A taco al pastor is certainly beautiful. But beauty takes work. First, there is the meat, usually pork shoulder or butt, sliced thinly and marinated in a mix of chiles, citrus, and spices. It might come as a surprise, but cinnamon is often included in the marinade.

Next, there is the trompo. Spanish for “spinning top,” trompo is both the name for the vertical rotisserie and the assembled, stacked meat. The finished product is a sparkling tower of pork: orangey-red with spots of char, the stratified layers melding together as flames lick it during the cooking process.

At a typical Mexico City taqueria, the trompero, who is responsible for slicing the pork, becomes the star. Taking a sharp, elongated blade to the meat, he cuts downward or on the bias to get the perfect slivers into a corn tortilla. If there’s a block of pineapple above the cone, the trompero will nick it, allowing the fruit to fall into the taco. If the trompero is a lifer, he’ll be sure to add flair. Perhaps a chunk of pineapple will soar above the trompero’s head and behind his back, where the taco is waiting. Salsa might be applied in a cascade by request. However, the salsa application is usually left up to the customer.

The taquero hands you the taco. There is a moment of silent contemplation before you pick up the hot tortilla cradling a pile of char-edged chunks of meat with off-white centers. The aroma of dark spices and harvested corn wafts upward. Let the significance of the taco and its history reveal itself. Finally, there’s the first bite, and if the taco al pastor is superior, there is silence once again. This is communion. The experience is much the same at El Pastor Es Mi Señor. 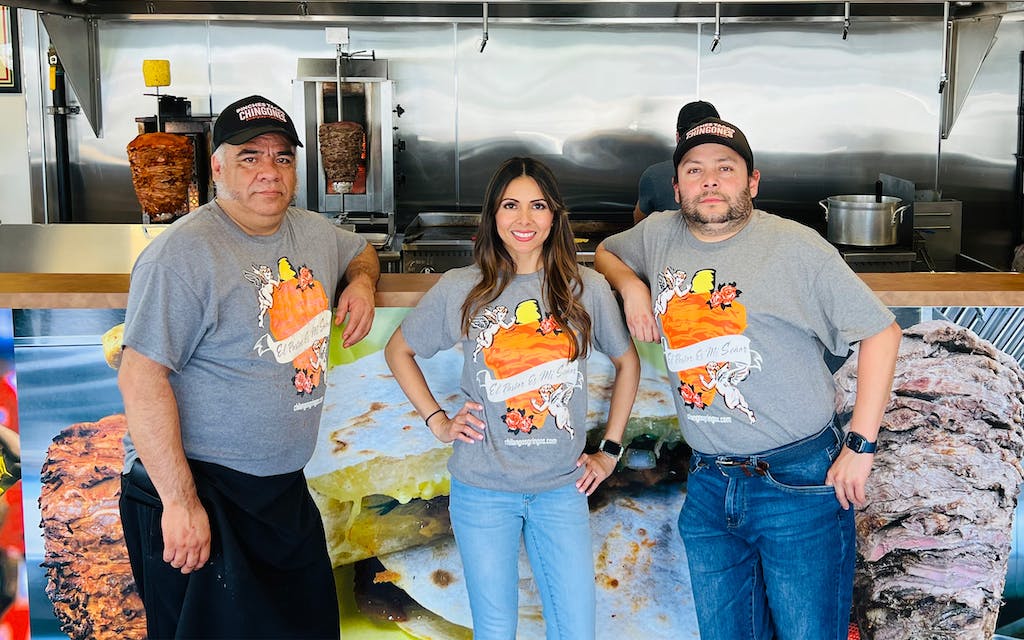 Opened by siblings Brenda and Alex Sarmiento in 2020—four days before the pandemic shutdown of restaurant dining rooms—El Pastor Es Mi Señor is an excellent homage to the Sarmientos’ native Mexico City. There is a traditional trompo of pork, weighing in at anywhere between fifty to seventy pounds. Thursday through Sunday, a trompo of sirloin stands tall and glorious next to it. Get both meats in orders of five con todo (with everything) and request the chile seed–studded salsa roja and salsa verde (campechano style, as trompero Don Jorge Garcia calls the preparation).

The tacos are served con copia (two tortillas per taco) on yellow paper–lined plates that evoke the colorful plates used at Mexico City street stands. Although Brenda wouldn’t give up the ingredients in the pork’s marinade, I tasted flavors of dried red chiles with earthy spices that played well against the meat’s sweetness. The swooshes of pineapple contribute color as well as brightness and acidity. The corn tortillas have a mild flavor, which could’ve come from nixtamalized masa, but, again, Brenda isn’t willing to divulge the purveyor. Instead, she says the taqueria sources from several local tortillerias, including San Antonio Colonial.

One day, the Sarmientos’ father, a frequent presence at the taqueria, paid them the ultimate compliment. “He was hanging out at El Pastor and walked up to me to ask, ‘Did you ever think you would own a restaurant that served your food and your culture?’ ” Brenda says. “​​It really touched my heart that he was looking at [my brother and me] that way. He was looking at the restaurant as a place that we’re using to bring a little bit of a part of who we are. And it was when he pointed it out that I realized how true that was. This is us.” Sarmiento begins to tear up while sharing the story. Tacos and Mexican culture are so intertwined and significant to immigrants and their Mexican American children.

Brenda is thankful and often surprised when other Mexico City natives, called chilangos, visit the restaurant and give it their stamp of approval. “We didn’t know there were so many chilangos here,” she says. “I’d [ask] them, ‘Where did you come from? Where have you been?’ We had no idea they were here.” The taqueria is also popular with doctors and medical staff from nearby hospitals. To Brenda’s surprise, some have told her they’ve done residencies or other studies in Mexico City and that the tacos take them back to their time there.

This status is hard-won and not without compromise or correction. “Like most immigrants, we’re often just finding our way with trial and error,” Brenda says. There’s the ever-changing tortilla purveyor, but there’s also been pushback from patrons accustomed to the dominant Monterrey-style trompo with its thick, paprika-forward seasoning. The regional variations have similar appearances but taste vastly different. The northern trompo is smokier and juicier. The tortillas for the Monterreyan tacos de trompo are also greasy. However, the tortillas at El Pastor are not greasy. Never mind the pastor pretenders that serve desiccated twists of non-trompo pork. El Pastor Es Mi Señor’s hours—it opens at 4 p.m.—hew to the tradition of Mexico City al pastor joints opening later in the day or well into the evening.

There are many ways one can order pastor or sirloin at El Pastor. Get it piled high atop fries (with thin wedges of pineapple and shots of cilantro and onion) or in tortas, burgers, salads, and alambres (with cheese, poblano chiles, bacon, tomatoes, and grilled onions). The alambres add a third, non-trompo meat: chuleta (pork chop), a Mexico City favorite. There are also crispy tacos available, and sandal sole–shaped huaraches recently joined the menu.

However, the volcán is the standout option. A small, crisped tortilla—with edges curled upward to give it a subtle frill—is packed with melted cheese and pastor, sirloin, or chuleta. Salsa and a small green tortilla are served on the side. The dish indeed resembles a bantam volcano. It’s salty, crunchy, and messy. The salsa gets everywhere, especially between your fingers. It’s joyous.

For these reasons, El Pastor Es Mi Señor is a taqueria I can’t shake. I want to visit it whenever I’m in San Antonio. It might just serve the best tacos al pastor in Texas, with a name to match. El Pastor Es Mi Señor is a reversal of the Spanish “The Lord [señor] is my shepherd [pastor].” As Brenda puts it, “Chilangos know that al pastor is king.”