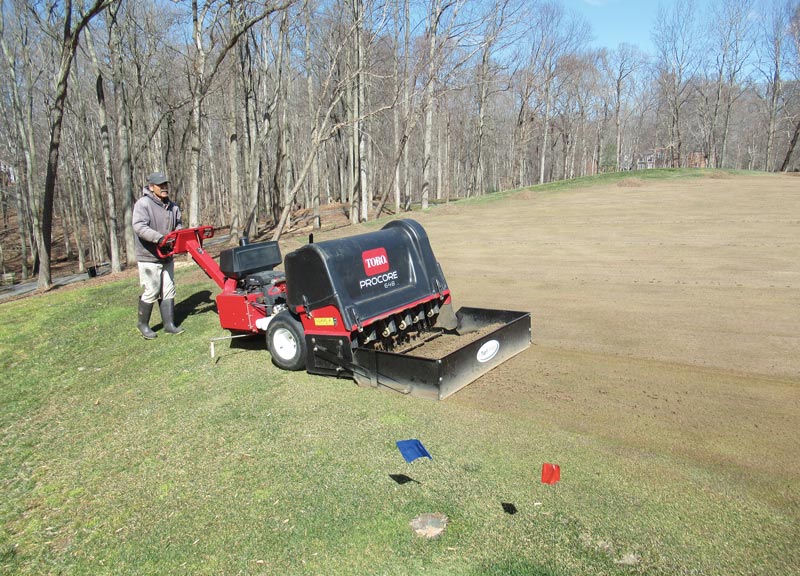 Is there a “perfect” time for aerification? With some tried-and-true tips and a healthy dose of experience, turfgrass managers can make the best call.

Aerifying dormant greens in early spring when there is no leaf growth on trees can sometimes result in a longer recovery compared with waiting until the greens resume normal growth. It is entirely weather-dependent. Photo by Steven McDonald

As an independent turfgrass consultant and researcher, I get hundreds, if not thousands, of agronomic questions each year. I could easily write a monthly column about some of the most perplexing questions I get while visiting golf courses. Most of those visits take place along the I-95 corridor — from Richmond, Va., north to Boston — but my work does allow me to venture out of this region as well.

One of the most common questions I get no matter where I’m working is about aerification timing. Whether you complete the same practice at the same time each year or switch up practices (depths of impact, for example) and when those practices take place, everyone at some point makes some sort of hole or opening in greens, tees and, hopefully, fairways.

Unfortunately, I am often invited to consult when even aerification can’t save the day — when greens are on the verge of death and I have to make suggestions to nurse them back to health. Sometimes the call has to be made to close greens to play while they recover. Other times I feel like a coroner when asked to explain the death of greens. The presence of green grass in old aerification holes often provides useful clues in an otherwise dead green. These holes show that there are significant benefits to aerification.

Balancing the stresses of aerification

Despite its documented benefits, aerification, without question, can be stressful on turf when done under environmental pressures such as heat and shade, or when done to turf that is in poor health to begin with. In most parts of the country, all of those factors need to be considered during the most popular time for aerification, which is late summer and early fall.

Making that aerification hole — whether through solid tining or by removing a plug of soil/thatch/turf — incurs the risk of heaving the turf, meaning the roots separate from the soil. This is especially problematic in late summer, when root systems are weak. A heaved turf will take a few weeks to re-root and, in the meantime, will require more water, making the surface softer than it was before aerification.

Aerification is also stressful because of the sand commonly used to topdress the green and the cleanup required. Sand on greens in late summer can store a lot of heat, especially when it’s sunny and temperatures are higher than 88 degrees F. Think about walking barefoot on beach sand on an August day — the sand hurts your feet, so you wear sandals. However, on a putting green, the grass doesn’t get a reprieve from the heat of the sand, which can cause severe heat stress to the turf. Additionally, the sand must be worked into the holes to achieve the best benefits of core aerification. Sand is abrasive, and extreme care needs to be taken not to abrade the turf. 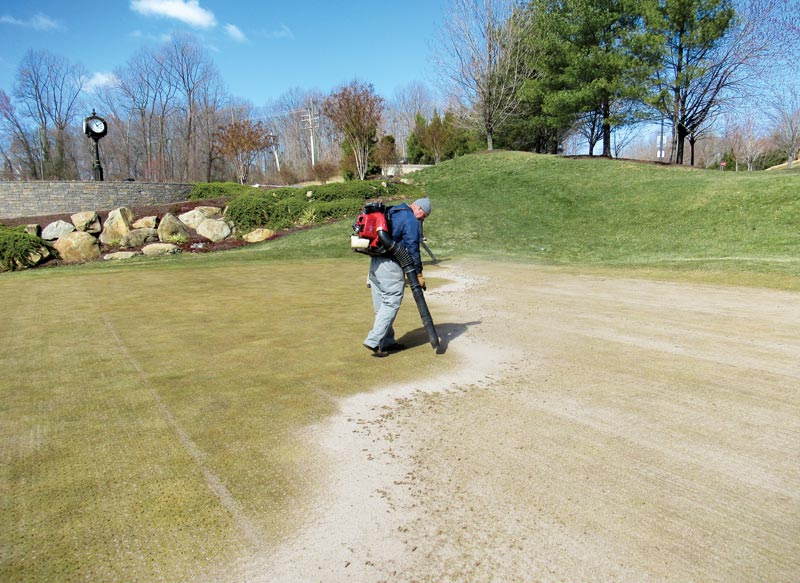 Blowing and dragging large amounts of sand on the surface of the turf is necessary to fill the holes, but if done during stressful weather or too aggressively, such practices can lead to abrasion and physical damage. Photo by Steven McDonald

The impact on green speeds must also be considered. More nitrogen is typically applied following aerification to get the holes to fill in quicker, which can reduce green speeds for three to five weeks or longer. Applying additional nitrogen to speed recovery might have an unintended negative impact too. For example, the stimulated grass may require more frequent mowing and rolling to obtain targeted speeds, but mechanical damage may result from that increase in maintenance, especially if there is a significant amount of sand in the leaf canopy.

Greens injured by late-summer aerification will likely remain in poor condition until late autumn. Lifting and other mechanical injuries may also result in slow recovery, and greens may remain weak until the following spring, sometimes until April or May.

In my career, which has included more than 1,500 golf course visits, I estimate I have seen more than 80 occurrences of greens hurt by late-summer aerification in the Mid-Atlantic and Northeast regions. In years such as 2018, aerification in late August and September caused notable damage, regardless of which method (hollow tines vs. solid tines vs. aggressive spiking) was used.

Even waiting until early October is no guarantee for success: 2018 was unusually hot and wet, and those environmental stresses resulted in extremely slow recovery from aerification. Another consideration at that time of year is the shortening of daily sunlight, which can lead to frosts, which slow turf growth significantly.

In some years, August may be a great time to aerate, but it only takes one event of extreme turf stress to cause superintendents to rethink when and how they aerify. The injury from aerification in 2018 (and other years) varied among courses and from green to green on those courses. Many times, shaded greens or greens that lacked air movement were most severely damaged.

Every course is unique in regard to golfing schedule, budget, labor, grass species and growing environments. For many, you can add seasonal concerns, a heavy tournament schedule, or the agendas of club professionals or owners to the mix. It’s hard to say which of those factors is the most important, but it varies from course to course, and the superintendents on the ground at those facilities will know the landscape best and how to make an informed decision. 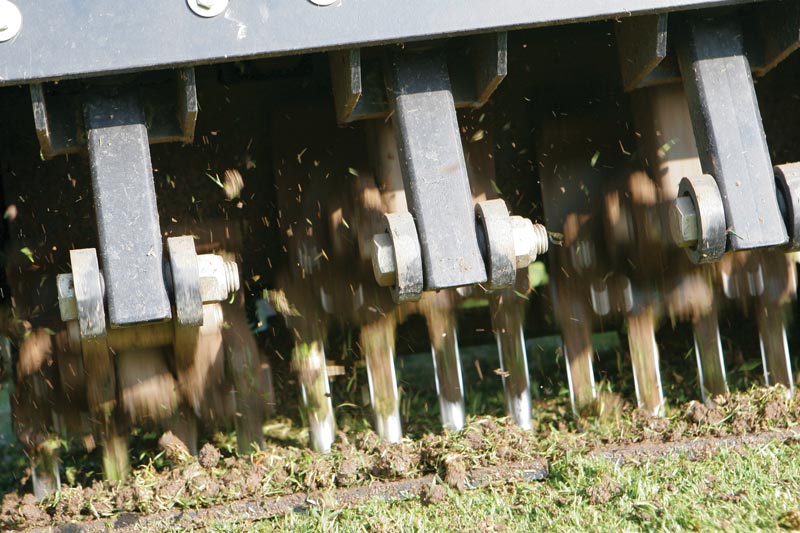 The most common time to aerify is late summer, and that’s also widely thought to be the best time to aerate, agronomically speaking, because holes heal quickly, and greens have typically recovered before any late-summer or autumn golf tournaments. I agree that mid- to late August and early September do provide a good time for quick healing. However, if the weather is not ideal at the time of aerification, as well as over the next few weeks during recovery, greens will not heal as quickly as they would during favorable weather. Do you trust the weather forecast? Keep in mind, if significant damage does occur, it could mean 30 to 60 days of additional stress on your greens.

Ideally, in the Mid-Atlantic and Northeast, autumn greens aerification would occur in mid- to late September or early October, which would generally give 14 to 18 days of good growth prior to frost. Unfortunately for many clubs, this timing overlaps with the height of year-end golf events, at a time of year that typically provides outstanding weather for playing golf. After frost occurs in October/November, there will be a significant reduction in growth and recovery, so pushing aerification back later into autumn can sometimes lead to other issues.

Late-autumn aerification (late October/November/December) is the least stressful on the actual turf, and more aggressive practices can be performed during that time frame. The downside is that sunlight hours are short and nighttime temperatures are cool, so even if there are some warm days, the holes will typically not heal until spring. Additionally, if the turf has shade from the south, soil will usually take longer to dry out following aerification.

Despite all the factors superintendents must consider regarding late-fall aerification, I do have many clients aerifying with high levels of success after their closing-day events in October. When they are aggressive in late fall, it takes pressure off early-spring aerification, enabling them to do something less injurious in spring, followed by some small-tine openings of the surface in May/June (which heal in seven to 10 days). This regimen should allow superintendents to comfortably maintain putting greens in a healthier condition with little to no disruption from the middle of April until late October. I have never seen an increase in winterkill or any issues with late-autumn aerification, even when it has been highly aggressive.

If holes from aggressive late-autumn/winter aerification are still visible in the green in spring, a simple solid tine, smaller coring tine or less aggressive sand injection (or a combination of those) could be done in spring. This lowers the pressure to be aggressive during spring aerification if the greens are performing well and thatch is not excessive. It also reduces the dilemma of how aggressive to be, knowing spring weather is highly unpredictable.