Hearty, tasty and very filling, German cuisine is up there with some of the most popular. Add to this a lively, fun and friendly atmosphere and lashings of incredible German beer and you have yourself a pretty awesome afternoon or evening out. From traditional to more modern, here are the best German restaurants and bars in or near Portland, Oregon (in no particular order)… 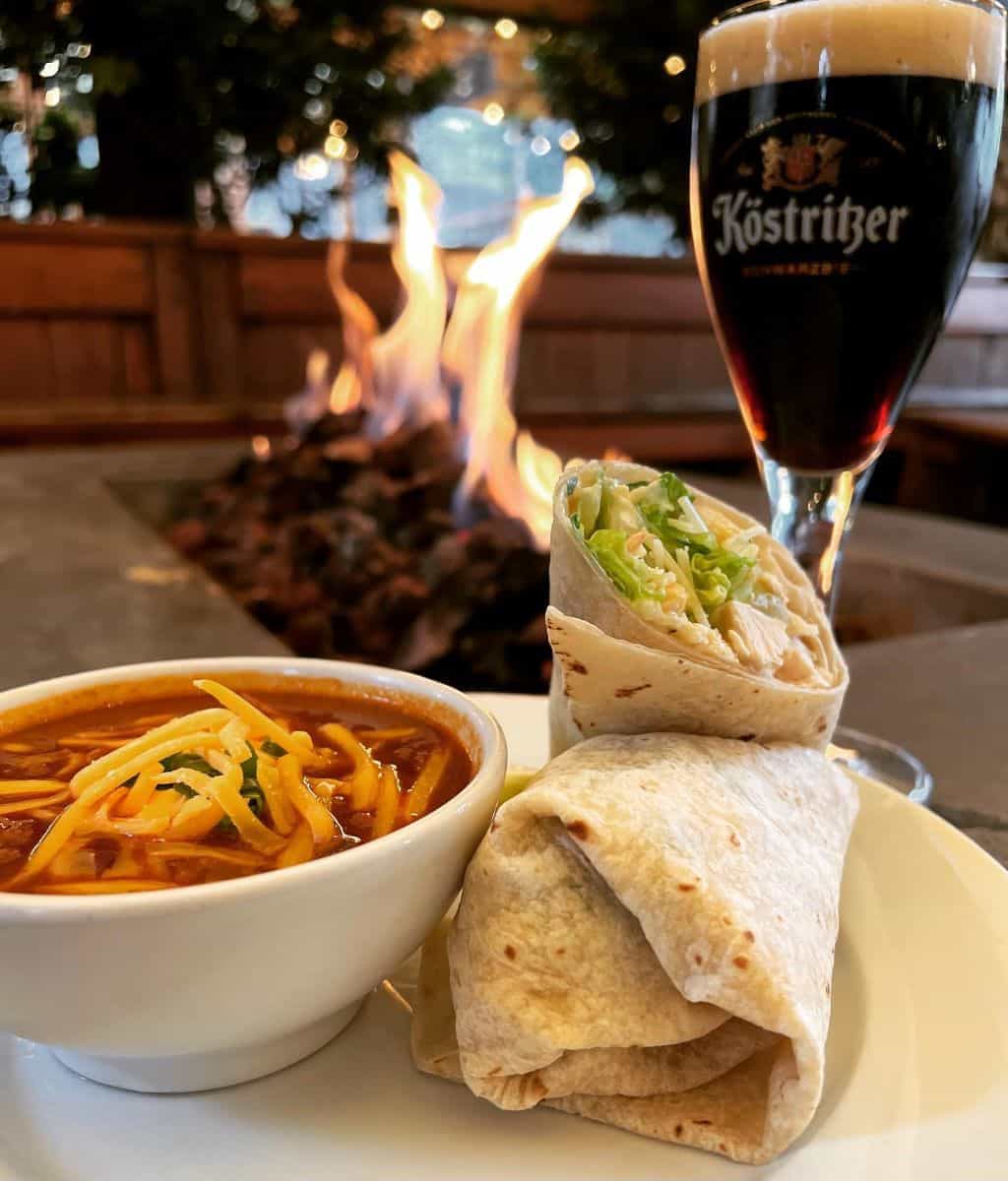 Situated in the Mississippi District, Prost! offers German biers that they reassure are authentic with every pour and sip.

Prost! is one of the best German restaurants and bars in Portland because they offer exclusive German beers that are usually difficult to find and enjoy by German beer lovers. They are also a local German pub with the longest hours operating from 11 am to 2:30 am daily.

Their beer cheese soup, Bavarian pretzel, and Braunschweiger are just a few of the many authentic German dishes that they serve up.

2. Stammtisch – a relaxed German eatery and bar offering a menu of classic German dishes and beer 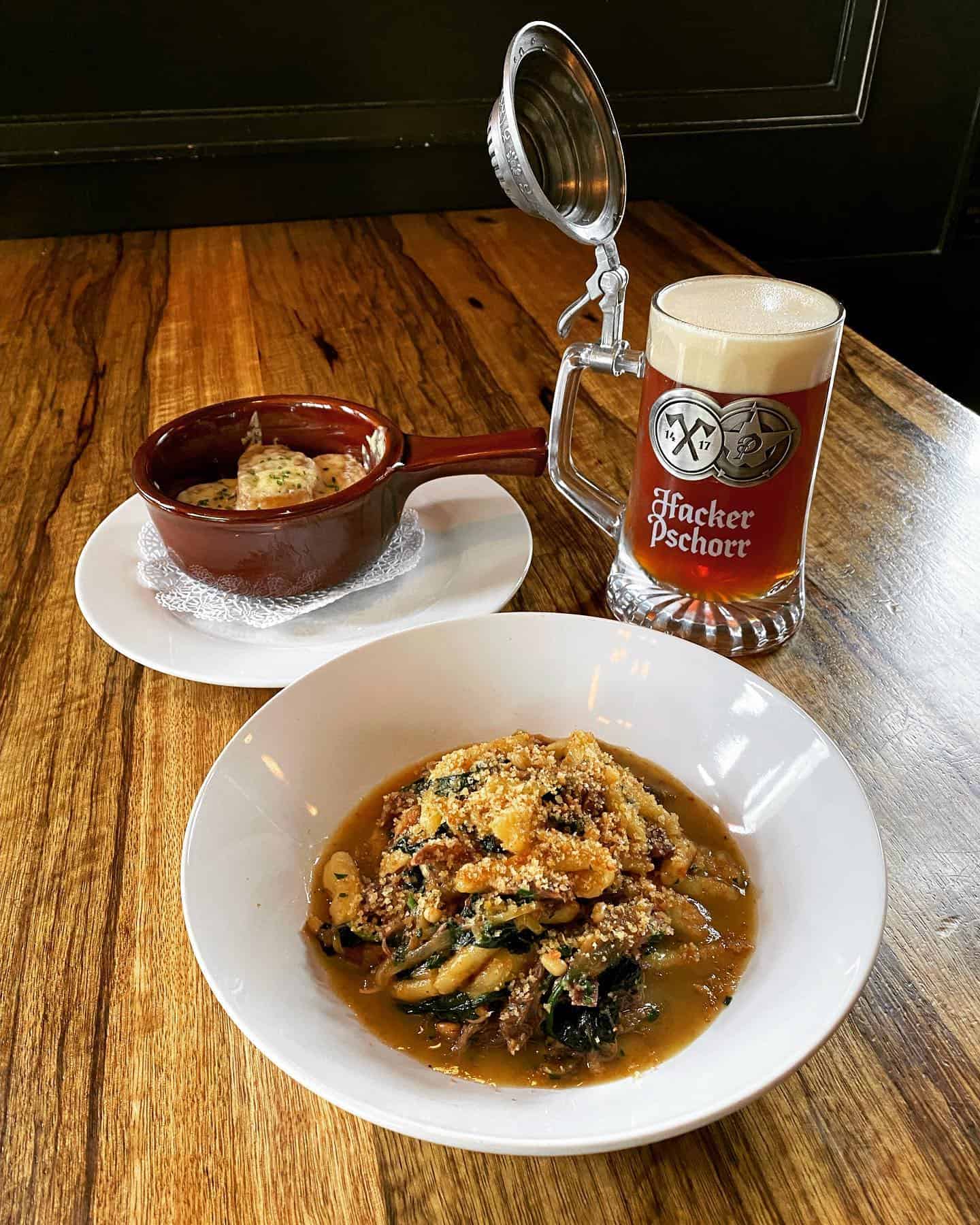 Stammtisch is a German restaurant that sells bocks, ales, and lagers such as Radeburger Pils, Paulaner Weissbier, and Ayinger Pilsner.

Located in the Kerns District, Graham Chaney is the person who made the Stammtisch menu. Dan Hart and Chris Navarra are the co-owners of the German restaurant.

They divide their food into small, medium, and large plates. Small plates include bretzels and frites. Medium plates are dishes such as kerbelsuppe and maultaschen. Large plates include lachs and schweinshaxen. 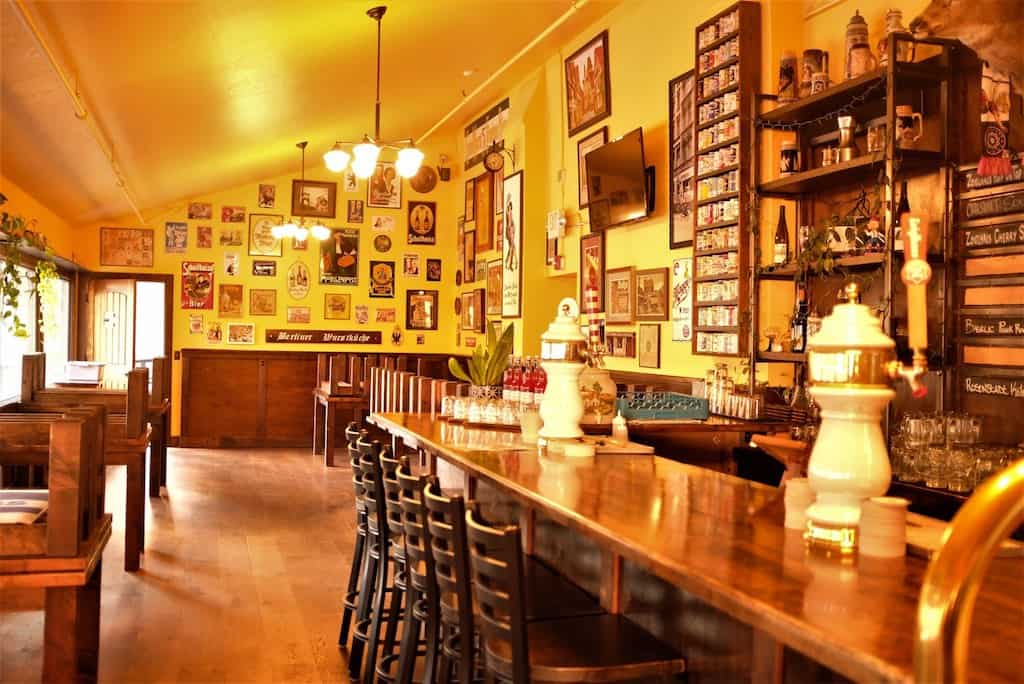 They feature old-world recipes with local Portland ingredients. Bringing Germany to America with the use of local ingredients is the greatest reason that Urban German Wursthaus is one of the best authentic German restaurants in Portland.

Try their Bavarian spicy sausage or authentic German bratwurst. Pair your sausage meal with one of the 8 main German imported beers on tap with other types on rotation during the year. Some of the beers on tap include Weihenstephan, Flensburger, Grevensteiner, and Jever. 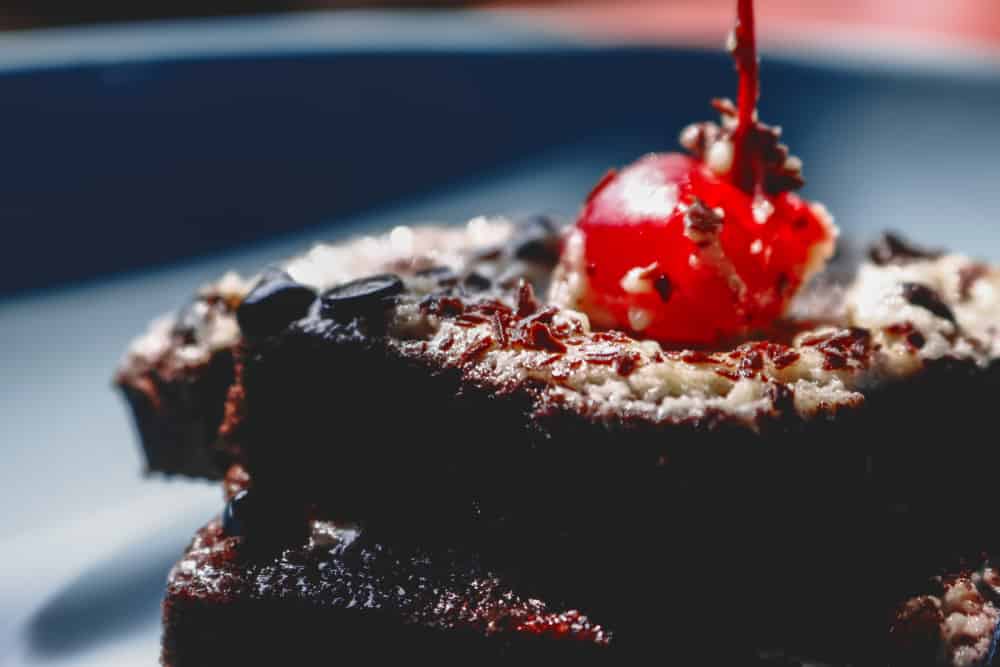 Otto & Anna’s Schnitzelhaus is a Bavarian eatery with speciality dishes including schnitzel, hence the eatery’s name, and pickle soup. Also lots of handmade desserts such as Black Forest Cake and German Chocolate Cake.

Dill pickle soup is always in stock because it is one of their signature dishes, but you can also request to try one of their other soups of the day to go with your schnitzel.

5. The Slide Inn – offers German and American dishes with a global twist with vegan and gluten-free options 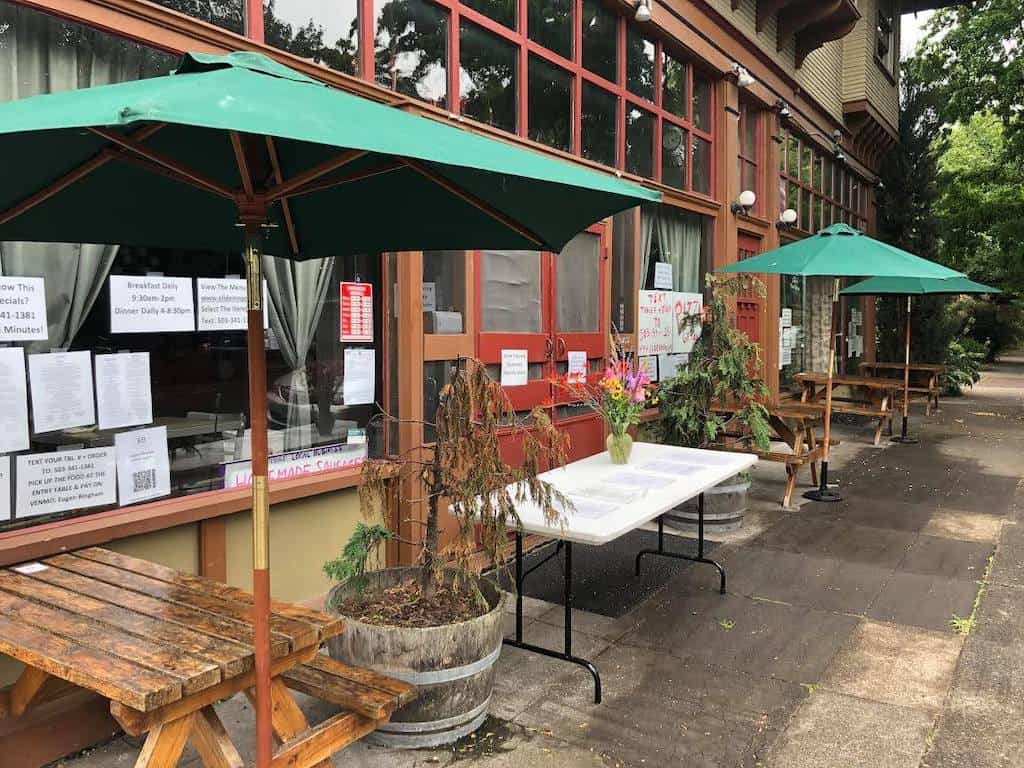 Choose from German draft beers such as Boneyard IPA from Bend, Oregon, Weihenstephan Kellerbier, and Avid, which is a warm Oregon cider. There’s also your choice of wine or cocktails.

For food, there are homemade sausages, burgers, schnitzel, rouladen, beef stroganoff, and flourless chocolate mousse torte for dessert. You can still enjoy a sweet treat at the Slide Inn if you are vegan because they serve vegan chocolate chip cookies. 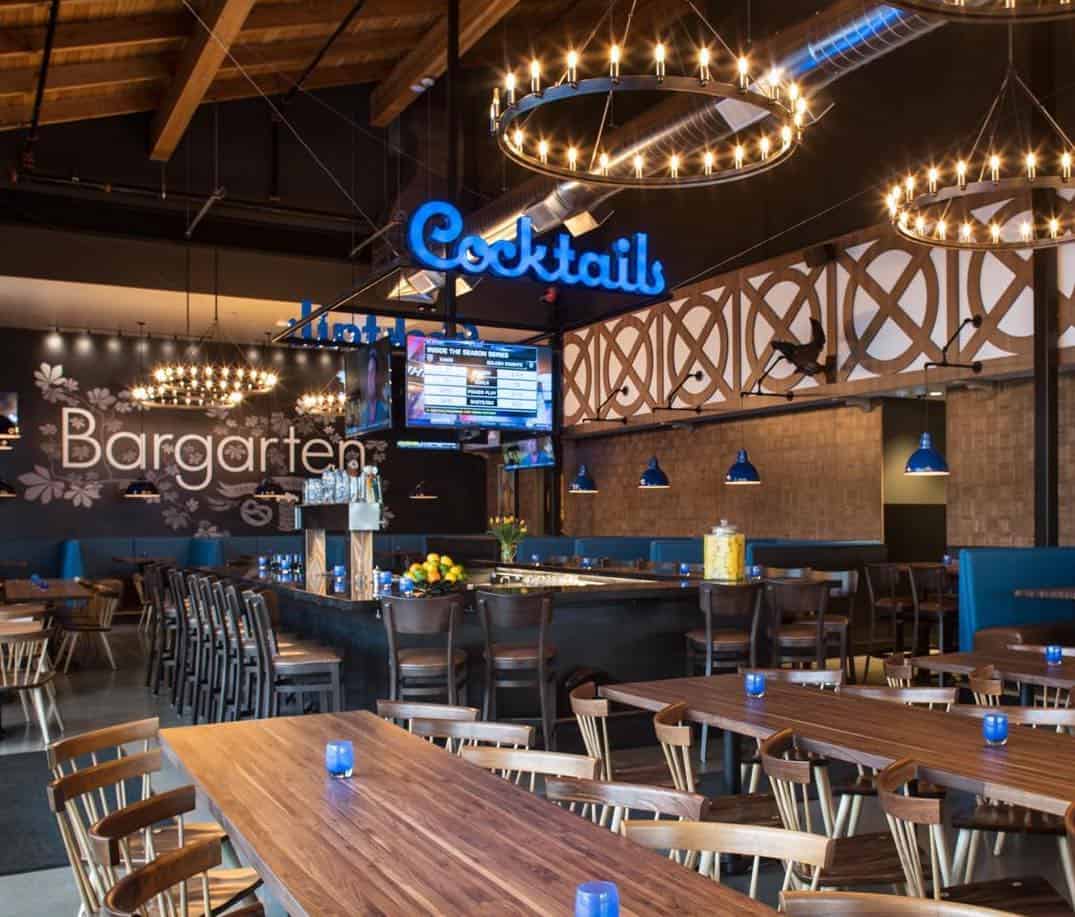 Bargarten Bavarian Social Haus is located 15 minutes away from Portland in Beaverton, Oregon.

The biergarten bar offers imported draught beer from Germany and other surrounding European countries such as 10 Barrel, Bitburger, Schofferhoffer, Hofbrau, and others.

Join in on their happy hour Mondays through Fridays from 3 pm to 5:30 pm for discounted pub grub eats such as prime rib sliders, bratwurst, and smoked bier sausage. 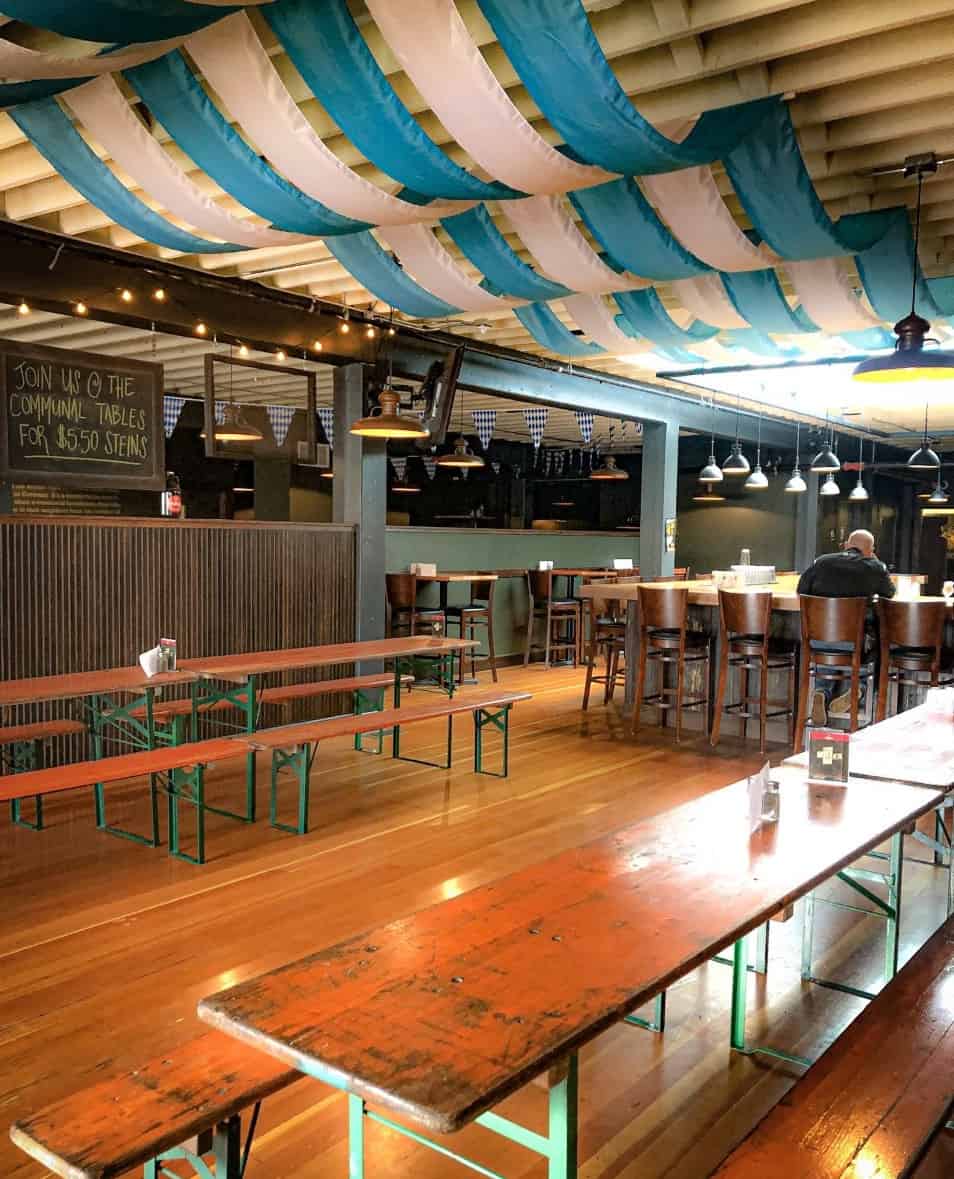 Zoiglhaus Brewing Company is a brewpub located in the Lents District.

All of their authentic beers are brewed in their warehouse and sold in their pub. Try the Swinging Star Vienna-style lagerbier or the Zoigl-Hell canned beer.

The Galaxy Defender dry-hopped pilsner is continuing to brew and coming soon to the pub!

Their food house specials include Jagerschnitzel, Classic, Schnitzel, and the Bratwurst Plate. Pair your food special with your choice of a side of fries or German potato salad. Sides are sold separately.

German beers on draft and German and American food 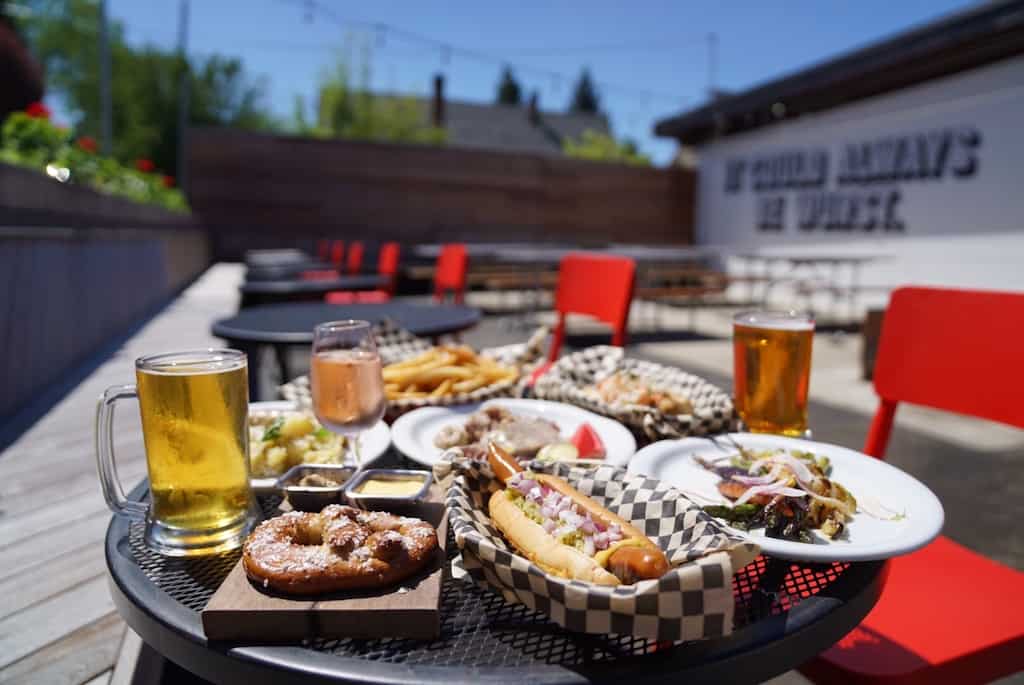 Richmond District’s Olympia Provisions House serves German beers on draft and specializes in serving up frankfurters. Bratwurst and kasekrainer are other German sausages they serve up besides frankfurters.

Kolsch, Helles Lager, German Pale, and Vienna Lager are just some of the many draft beers that they have available to drink.

If you are more in a sandwich mood, you can try the Carman Ranch Burger or the Public House Grinder.

Besides their Portland location, there is another Olympia Provisions House in Oregon City, Oregon. 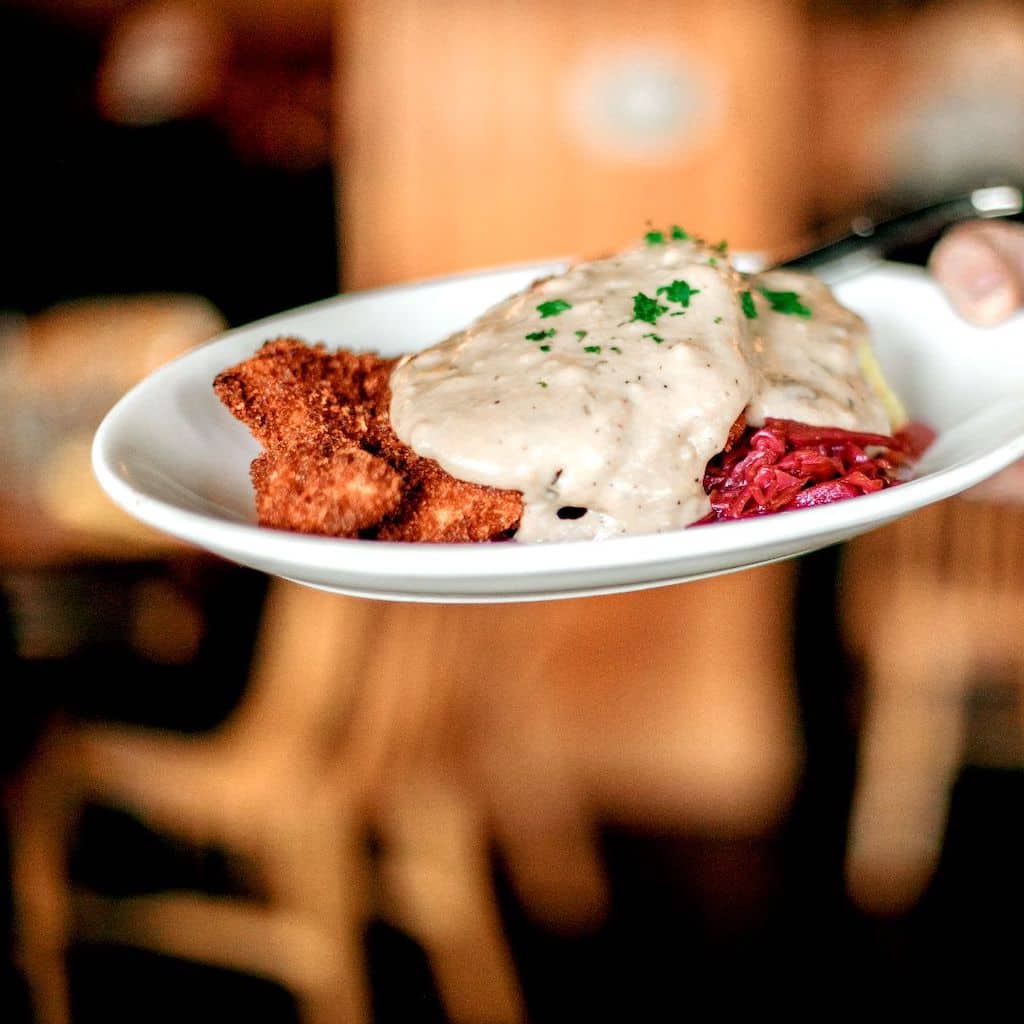 The Glockenspiel is a German pub located about an hour away from Portland in Mt Angel, Oregon.

While they are temporarily closed, we are sure you will love their Glockenspiel Sampler to go with your choice of draft beer, wine, or cocktails. The sampler includes German sausage bratwurst, German stone ground mustard, gherkins, sauerkraut, fondue cheese, and a flaky baguette.

Visit their website to get an update on when they will reopen along with their new hours. 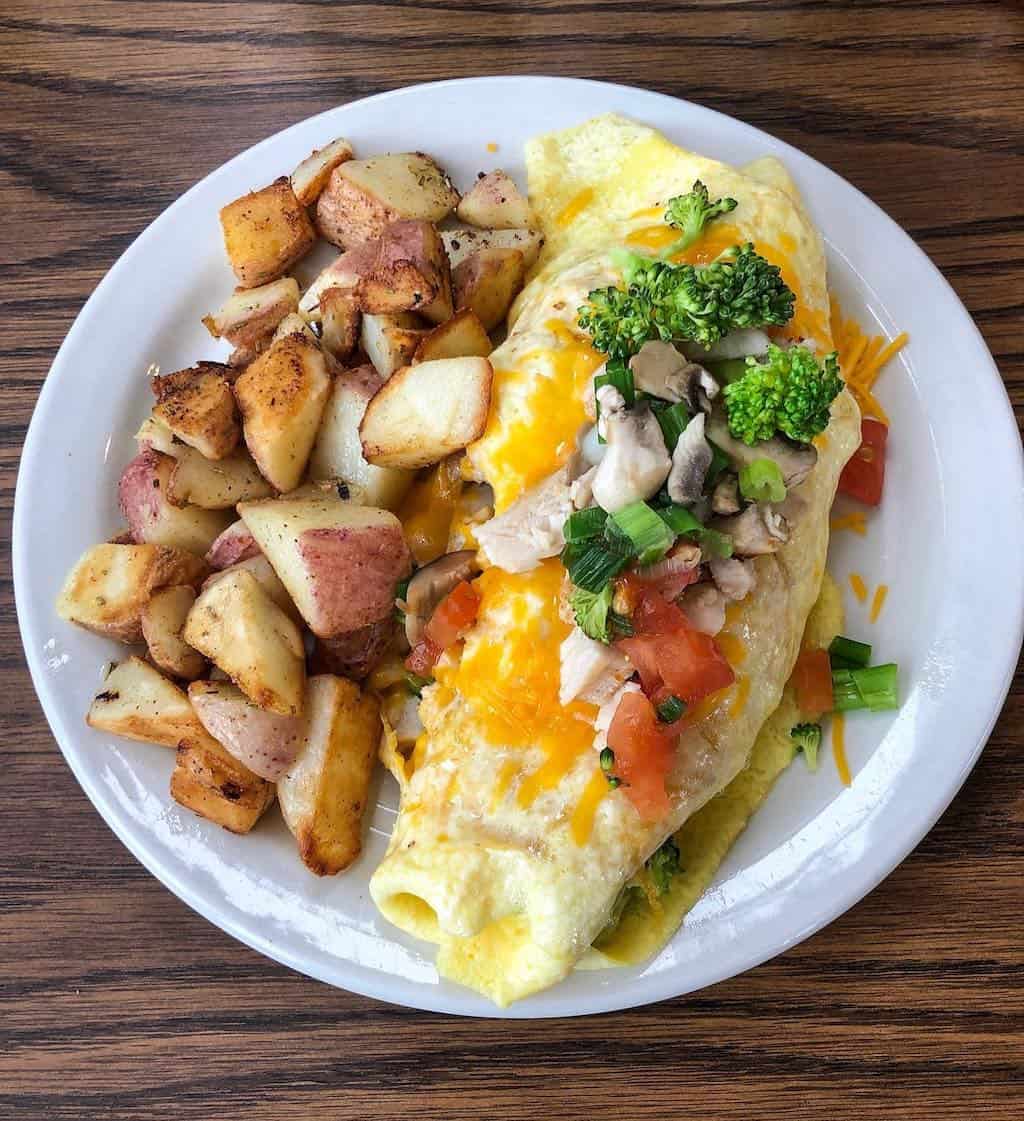 Heidi’s of Gresham is about a half-hour away from Portland in Gresham, Oregon.

While they do not have German beers, lagers, or ale like the other German restaurants on our list, they are more of a family-friendly establishment with kids’ meal choices on the menu, too.

Donerland Food Cart is a German-Turkish food cart located in the Piedmont Food Carts Station in the King District.

Their specialties are salads and doner kebab, all homemade. The doner kebab is made with flatbread, sliced lamb (beef or chicken as a substitute), pepperoncini, onions, lettuce, tomato, and yogurt sauce.

The doner salad is made with the same meat as on the doner kebab. The meat, mixed greens, yogurt sauce, onions in tahini sauce, pickled red cabbage, and tomatoes are in this salad. If you want feta cheese, that would be an extra dollar upcharge. 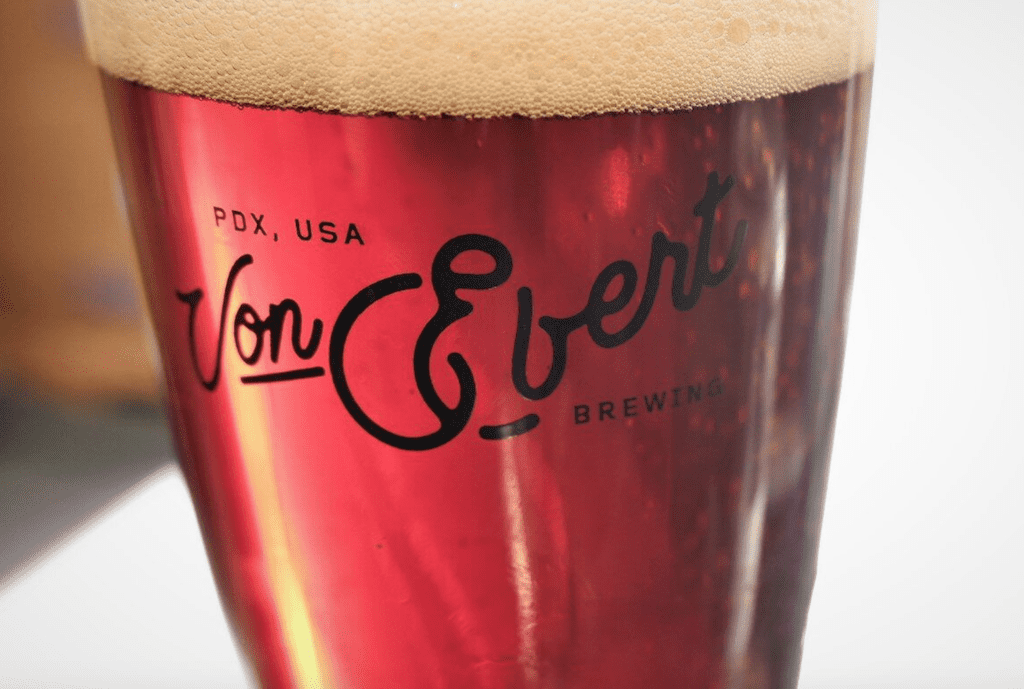 Scott started his travelling life back in 1999, when he headed off on a solo jaunt to South Africa, Australia, New Zealand and South East Asia with just a backpack, a camera and a spirit for adventure. After that, the travel bug bit hard and now he is always seeking to head off somewhere new. Over the years he has lived in Italy, Qatar, Ireland, UK and the US but his spiritual home will always be Rome as this is the city which most satisfies his unrelenting craving for culture, good food and great football. Scott loves nothing better than to be behind the camera and also runs his own blog and Instagram page. He also counts Melbourne, Cape Town and Tel Aviv among his favourite places. Follow him on Twitter and Instagram at @scottbalaam