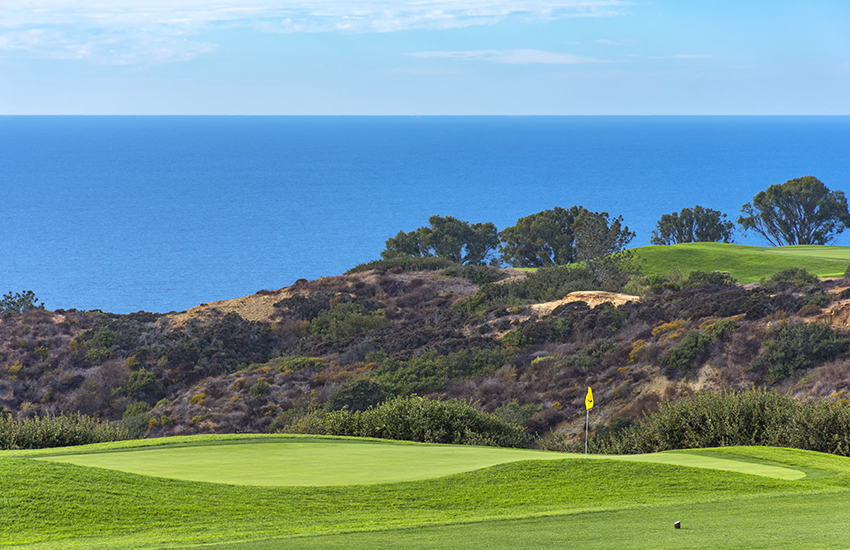 If we had to pick a part of the country with the best golf courses and conditions, it’d be difficult to confidently pick just one. But, California would most certainly be in the conversation. While Florida offers a tropical golf paradise and New York boasts some of the nation’s most revered tracks, California, and its 900 courses (yes, 900!), offer a different kind of magic.

With visually stunning and ingeniously designed courses around every mountain or valley, there’s arguably no spot more saturated with award-winning golf. From those skirting the rugged coast of the Pacific to the green splotches breaking up the barren desert landscape, we’ve gathered the top golf courses in California that you simply must see to believe.

Where to Tee it Up Out West 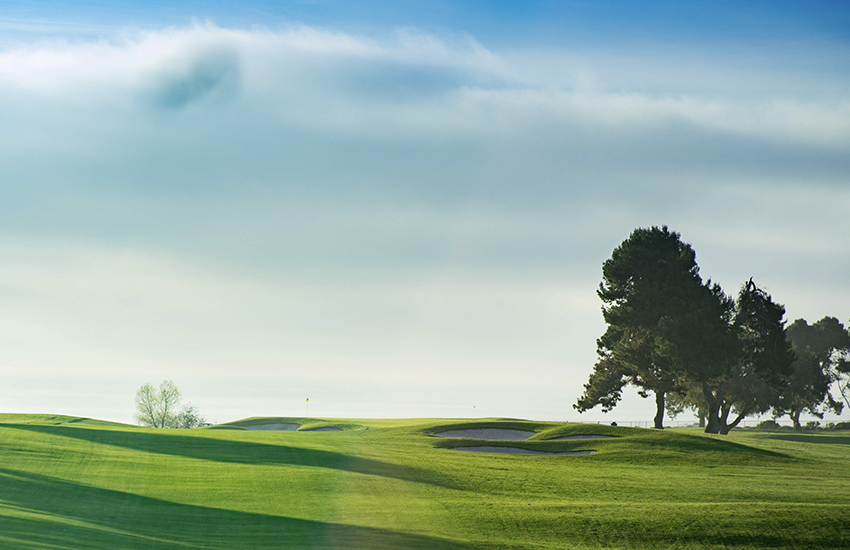 Torrey Pines is not only one of the top golf courses in California, but it’s also the site of this year’s 3rd major championship. The tournament-caliber golf course, owned by the city of San Diego, boasts 36-holes of public golf overlooking the Pacific Ocean. The course was named after the Torrey Pine, a rare tree native only to the area, and is now largely regarded as the nation’s premier municipal golf course.

After a series of renovations and restorations over the course of a century, San Franciso Golf Club was and is one of the highest quality golf courses in California. The club occupies a stunning piece of land, highlighted by rolling hills and towering pines. Its quiet setting is exceedingly appealing, but the history of the club isn’t quite as unsuspecting. Its most famous hole, the par-3 7th dubbed the “Duel Hole,” was the site of the nation’s last legal duel. Now, rather than challenging each other, players are faced with a downhill tee shot, a two-tiered green, and a handful of bunkers long and left. 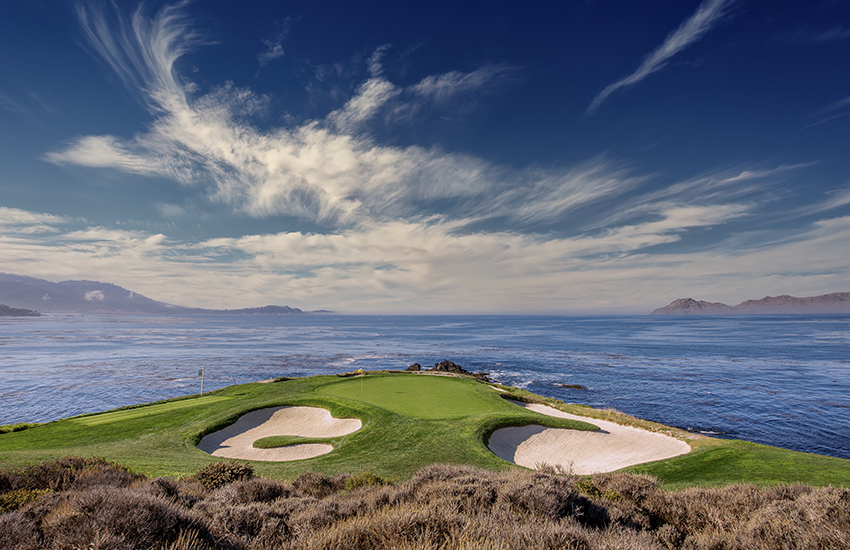 Highly regarded as the No. 1 public course in the country and one of the most sought-after golf courses in California, a round at Pebble Beach is on every golfer’s bucket list. The timeless design is carved into the rugged California coast, just steps away from the Pacific Ocean. With strategic bunkering, a prevalent wind, and the looming water hazard of the ocean, Pebble Beach is the experience of a lifetime.

With six different world-class courses and a convenient location near Palm Springs and Palm Desert, PGA West is easily one of the top golf spots in California. While the Stadium Course is the premier track of PGA West, the 5 remaining courses offer all kinds of great golf. From a taste of the Scottish links to lush fairways against a backdrop of the Santa Rosa Mountains, it’s easy to see why so many golfers continue to return to PGA West.

Established in 1860, when mail was still being delivered via horseback, Olympic Club is the oldest athletic club in the United States and one of the top golf courses in California. And if there’s any spot that has truly withstood the test of time, it’s this gem nestled between Lake Merced and the Pacific Ocean. The club boasts a total of 45 holes of unforgettable golf, including the Lake Course, the Ocean Course, and the Cliffs Course – a member-favorite, par-3 track with postcard-worthy views of the Pacific.

Host of the 2023 U.S. Open, a 2010 restoration led by Gil Hanse has breathed new life into the fairways at Los Angeles Country Club, one of the premier golf courses in California. Originally designed by George C. Thomas, Los Angeles Country Club occupies a stunning piece of real estate nestled in the heart of The City of Angels. The parkland-style course is just as angelic with magnificent par-3s and the occasional view of downtown Los Angeles. 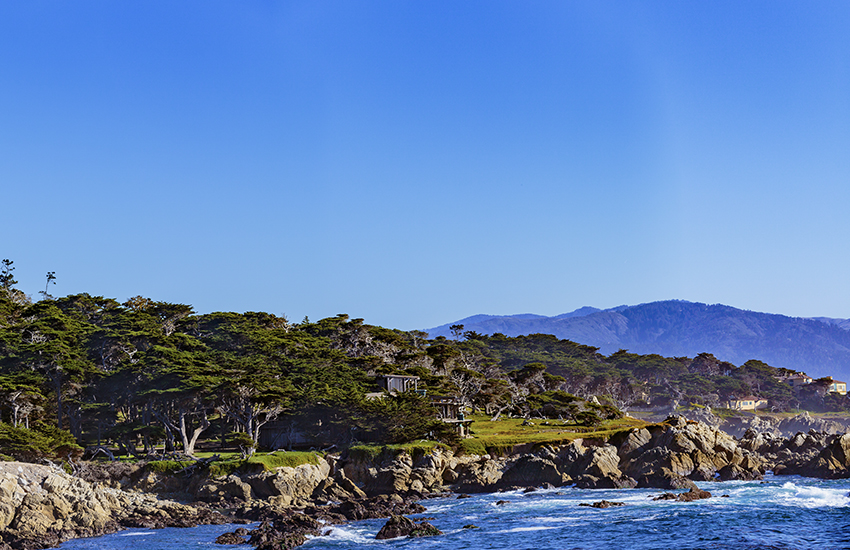 Designed by Alister Mackenzie in 1928, Cypress Point Club is one of the top golf courses in California and the premier golf destination of the Monterey Peninsula. The club was most recently ranked No. 3 in Golf Digest’s 2021-2022 list of America’s 100 Greatest Golf Courses, outranked only by Pine Valley & Augusta National Golf Club…some good company to have if we’ve ever seen it.

It only took 15 different drafts of the course design to finally reach what we see today at Riviera Country Club. Designed by George C. Thomas in 1927, the course has only undergone one renovation in its almost 100 years – a bunker revitalization led by Coore & Crenshaw. Riviera was built on what was initially a less-than-stellar piece of land among the Santa Monica Canyon. Today, it’s one of the most celebrated golf courses in California. Located minutes away from Sunset Boulevard, Riviera has hosted a handful of major tournaments and is the annual host of the Genesis Open.

More Of Our Favorites

With timeless designs and unforgettable views, the top golf courses in California are the ultimate destination for your next golf trip. Get a free quote today for your golf trip or learn more about shipping your golf clubs and luggage ahead.