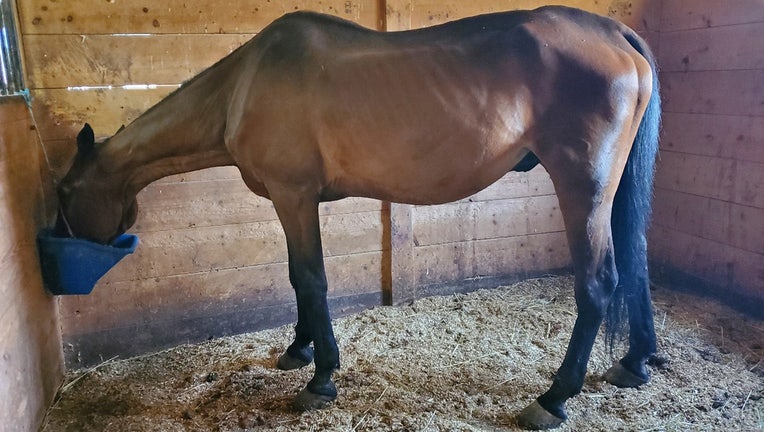 A carriage horse that collapsed on a Manhattan street a few weeks ago has been retired and moved to a private horse farm outside of New York City.

The farm owner says that Ryder is being treated by a veterinarian and is "bright, alert, eating and drinking, and has gained some weight."

Ryder collapsed on a street in Hell's Kitchen on Aug. 10.  The responding veterinarian in the city diagnosed him with EPM, a neurological disease caused by a parasite transmitted by possums and raccoons.

Get breaking news alerts in the free FOX5NY News app!  |  Sign up for FOX 5 email newsletters

Subsequent blood tests revealed a low white-cell blood count. The veterinarian has now placed Ryder on antibiotics and is considering other courses of action, according to TWU Local 100.

According to Ryder’s former owner, Ryder was purchased earlier this year after his owner in Amish country no longer wanted him. The horse was listed as 13 years old. The responding veterinarian and NYPD Mounted Unit that responded on Aug. 10 estimated Ryder to be much older.

A subsequent review of records has determined he is 26 years old, which is too old to be licensed by the city as a carriage horse, the TWU says.