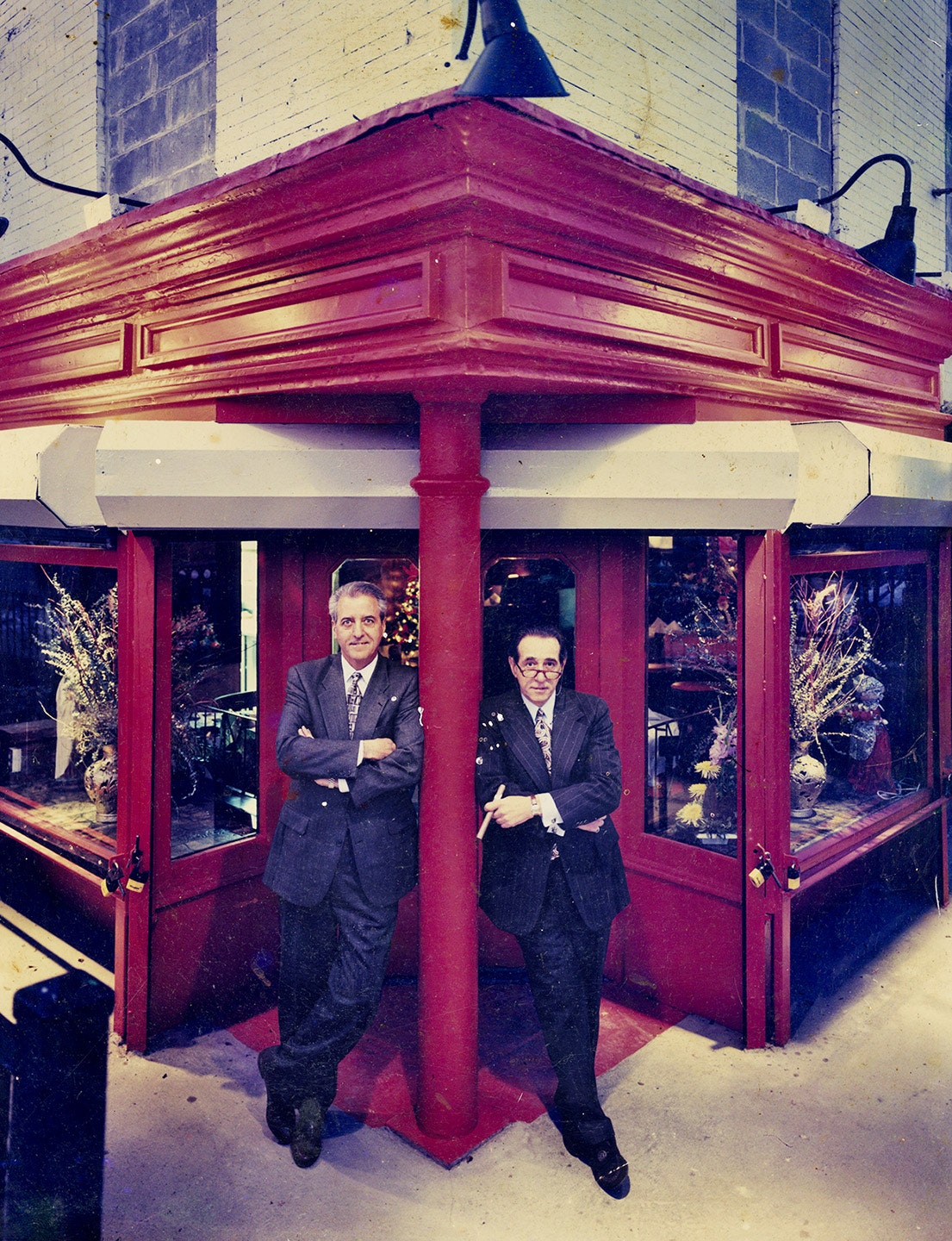 When Frank Pellegrino Sr. walked into Rao’s on a Tuesday night recently,
wearing a black blazer, white shirt, gray slacks, gold bracelet, and
signet ring, he led with his black velvet smoking slippers. He took a
Chivas on the rocks off the bar, seated himself outside the restaurant’s
front door on its small cement patio, at the corner of East 114th Street
and Pleasant Avenue, in Manhattan, and lit a Parliament 100, ready to
greet his guests in style. As he has been doing five nights a week for
the past 22 years as the co-owner of Rao’s, Pellegrino was entertaining
at home.

He didn’t wait long. A group of men arrived, and the first one embraced
him. “You look great, Frank,” he said.

“You know who you look like?” the man asked.

They were certain to; the fact that they are among the few people in
America who will ever eat here practically guarantees it. Since 1977,
when Mimi Sheraton awarded it three stars in The New York Times, Rao’s,
with only four tables and six booths, has been among the toughest
restaurant reservations in the country.

Rao’s co-owners Ron Straci and Pellegrino Sr. outside the restaurant, 1995.

For the uninitiated, Rao’s has been at this corner in East Harlem, an
Italian neighborhood that was even larger than Little Italy back in the
day, since 1896. (And if you’re looking for the safest corner in
Manhattan to park your car, look no further.) This year marks the
restaurant’s 120th anniversary. It began as a saloon and is still in its
original one room (slightly remodeled after a 1995 fire), whose paneled
walls are festooned with Christmas lights and photos of Frankie Valli
and Frank Sinatra. There is a bar at one end, a jukebox along the wall,
and seating for about 60. It looks like the finished basement that
belonged to the most popular kid in high school, class of 1962.

Known by its regulars as the Joint, Rao’s serves Monday to Friday
(dinner runs about $75 per person, cash or check only). Typically there
are no reservations, just table assignments, which were designated
decades ago by Pellegrino Sr. and his aunt Anna Pellegrino, who owned
the place with her husband, Vincent Rao. (It was named for his father,
Charles.) After Anna and Vincent died, in 1994, Pellegrino Sr. and
Vincent’s nephew, Ron Straci, a lawyer, became co-owners. One table each
night belongs to Straci, who is 81. Some customers come weekly, others
come monthly, quarterly, annually, or only at Christmas. When any of the
85 original “owners” die, their families will often inherit the table.

On their appointed night, diners arrive when they like, and the table is
theirs for the duration. If they can’t come, they either give it to
family or friends, sell it as a donation for a favorite charity, or,
rarely, turn it back to the house. Which means that if you want to get
in you have to know someone who knows someone who knows someone else.
Which is how Pellegrino got his nickname, Frankie No.

Some of Rao’s regulars are connected—to show business—which is how
Pellegrino was cast by Martin Scorsese for GoodFellas (see the
cigar-smoking chef in the cooking-in-prison scene), along with five
other Rao’s regulars; he went on to play an F.B.I. bureau chief on The
Sopranos. Bo Dietl, the private investigator who began his career as an
East Harlem cop and was granted his weekly table in 1977 (the big one,
up front), joined him in GoodFellas and shot his scenes in The Wolf of
Wall Street with Leonardo DiCaprio here. Through the years you could
find Keith Richards, Billy Joel, Celine Dion, and Rod Stewart singing
along with the jukebox until all hours. Also Jimmy Fallon and Gloria
Estefan. Jay Z shot his “D.O.A. (Death of Auto-Tune)” video here. When
Hillary Clinton ran for the Senate, in 2000, she came for a late dinner,
and the Secret Service locked the door from the outside. Donald J. Trump
ate here years ago, his daughter Ivanka more recently. She sent a
handwritten thank-you note.

Unless requested, there are no menus at Rao’s. Staples such as seafood
salad, lemon chicken, and super-size meatballs are served family-style.
The food is homey and most often delicious; Rao’s marinara sauce, sold
retail through the family-owned Rao’s Specialty Foods since 1991, is a
historic cornerstone of the kitchen’s success. Next month marks the
publication of the fourth Rao’s cookbook, Rao’s Classics, written by
Pellegrino and his 46-year-old son, Frank. Pellegrino Jr. is the
managing partner of the Rao’s that opened at Caesars Palace, in Las
Vegas, in 2006 (350 seats, which includes the outdoor terrace; come and
get ’em) and also the Rao’s that opened in Hollywood, in 2013 (100
seats; ditto). New York remains the beating heart of the empire, the
man-cave mother ship that abhors the world of celebrity chefs and
blogging locavores. As Dietl says, “It’s like walking back into the
good old days.” 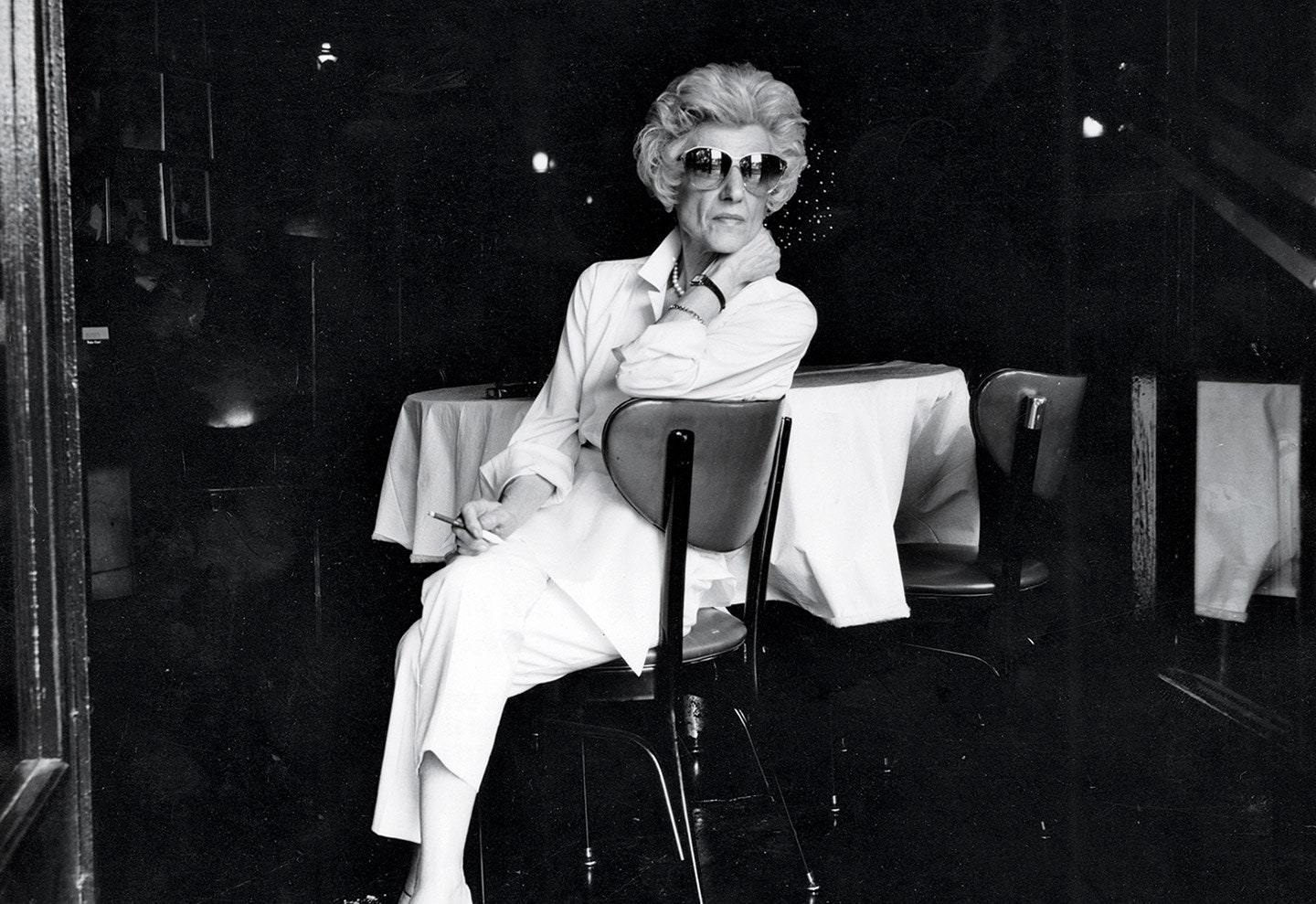 Some of those days were good; some were hard. Charles Rao bought the
saloon in 1896 from the George Ehret Brewery. Customers arrived with tin
pails; the beer was sold directly from the bar’s taps. Charles died in
1909, and his brother Joseph ran the place until his death, in 1930.
Vincent and his brother Louis became operating owners then, keeping the
bar open during Prohibition. Neighbors made wine in their cellars and
pumped it into Rao’s basement through a hose. It sold for $1 a bottle.

Louis ran the restaurant until he died, in 1958, when Vincent took over.
At that point it was primarily a steakhouse, with some Italian dishes,
but, by 1974, business was so brisk that his wife, Anna, joined in to
expand the Italian side of the menu. Vincent, who was born in the house
next door to Rao’s, was raised there and married there. He died there,
at 87, in 1994. Anna died that year as well. The two nephews have owned
the place ever since.

Pellegrino Sr. sat on the patio and sipped his Chivas, his gold turtle
cuff links flashing. In Rao’s Classics, we learn of his obsession with
the turtle: “With its impregnable exterior, methodical and plodding
style, resilience and pluck (be careful when he snaps), the turtle is
his avatar.” Given senior’s background, it makes sense. The undisputed
ringmaster of Rao’s, who glad-hands like a pro and makes it all look
easy, he is also the guy who came up the hard way, working every day
since he was 16, in the kitchen, behind the bar. He readily admits,
“I’m no genius.” But he doesn’t need to be. Senior believes in growing
talent; loyalty means everything here. He has a long memory, and he’s
not afraid to use it. He’s been married to his wife, Josephine, who is
junior’s mother, for 47 years.