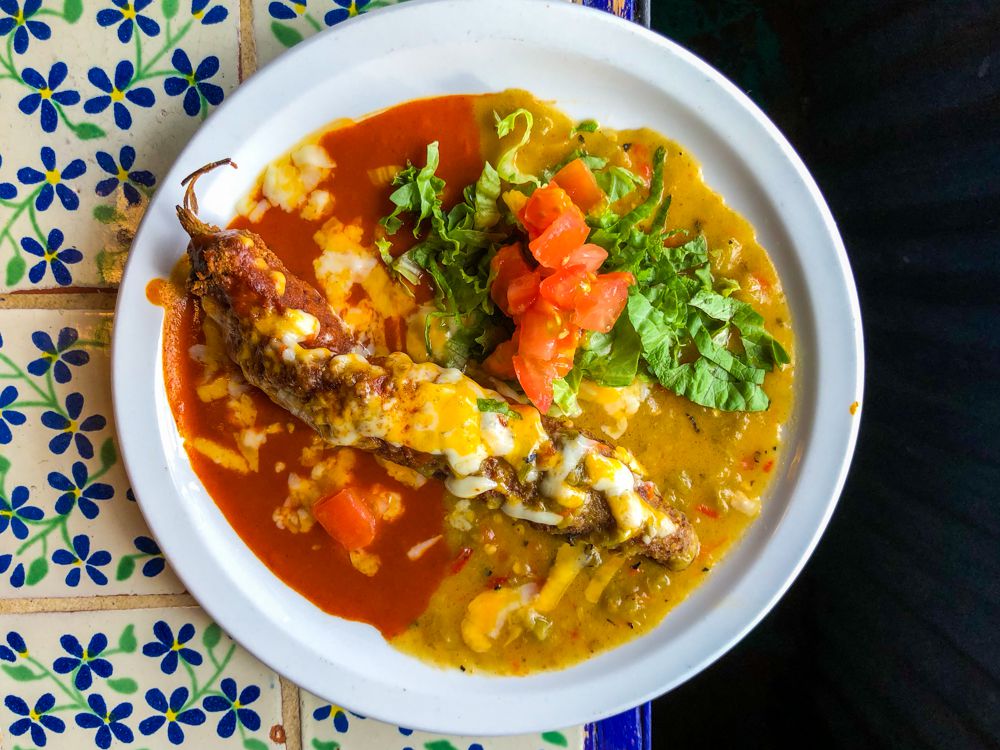 Ask anyone from Providence, or Boise, or Charleston about, say, fajitas and queso, and they’ll quickly recognize the staple dishes of Tex-Mex. But for whatever reason, the foods of the Southwest — which, for our purposes, includes New Mexico, Arizona, Colorado, Utah, and Nevada — haven’t gone mainstream like those of its eastern neighbor. Which is a shame. Southwestern cooking has a vibrant mestizo heritage — a mix of Native and Hispano, with a dash of Anglo thrown in — and includes some of the most intensely spiced dishes in the Americas.

Yet the defining characteristics of Southwestern cuisine are a mystery to most Americans, a reality further complicated by the fact that the line between Tex-Mex and Southwestern food is fuzzy. To be sure, there are similarities: Both traditions share core ingredients like corn, beans, and chiles, for instance. But Southwestern cuisine has a number of key signifiers that separate it from the queso-smothered foods of the Lone Star State. From a reliance on whole chiles to a love of blue corn and vegetables, here are a few ways to mark the venerable, deceptively complex foods of America’s Southwest.

It’s All About the Chiles

If you asked a random sampling of Southwesterners what best characterizes their food, most would probably answer, “chile.” They’re not talking about chili powder blended with cumin and other Tex-Mex spices — they mean long green chiles, and their more mature, mellow counterpart, red chiles.

When the Spanish pushed north from Mexico into the area near present-day Santa Fe in the early 1600s, they found that the chile seeds they brought with them flourished in the climate. Over more than a century of isolation, a distinctive cuisine developed that relied on the chile as pretty much the sole source of seasoning. Today, the state of New Mexico and the surrounding Southwest (with the exception of Nevada) use the varietal known as the New Mexican chile almost exclusively — most often in the form of the signature cooked sauces of either chopped, fresh green pods or their dried red cousins. Not everyone realizes that green and red chiles are from the same plant; if not picked while green, they eventually turn red.

Blankets of chile sauce, either red or green — or both — smother nearly every traditional dish, from enchiladas to burritos to scrambled eggs. The basic recipe is essentially the same regardless of color: A base of oil or other cooking fat gets a little onion, garlic, or both, sometimes a bit of flour or cornstarch for body, and some stock or water. The chiles are added, not by the spoonful, but by the cup. While they’re made in roughly the same fashion, green and red sauces differ surprisingly in taste and texture. Whisked up with the chopped bits of green chile, green sauce has a vegetal, grassy heat, while red tastes earthier and sweeter. (In Arizona, they cook red sauce with tomatoes, making it milder still.) 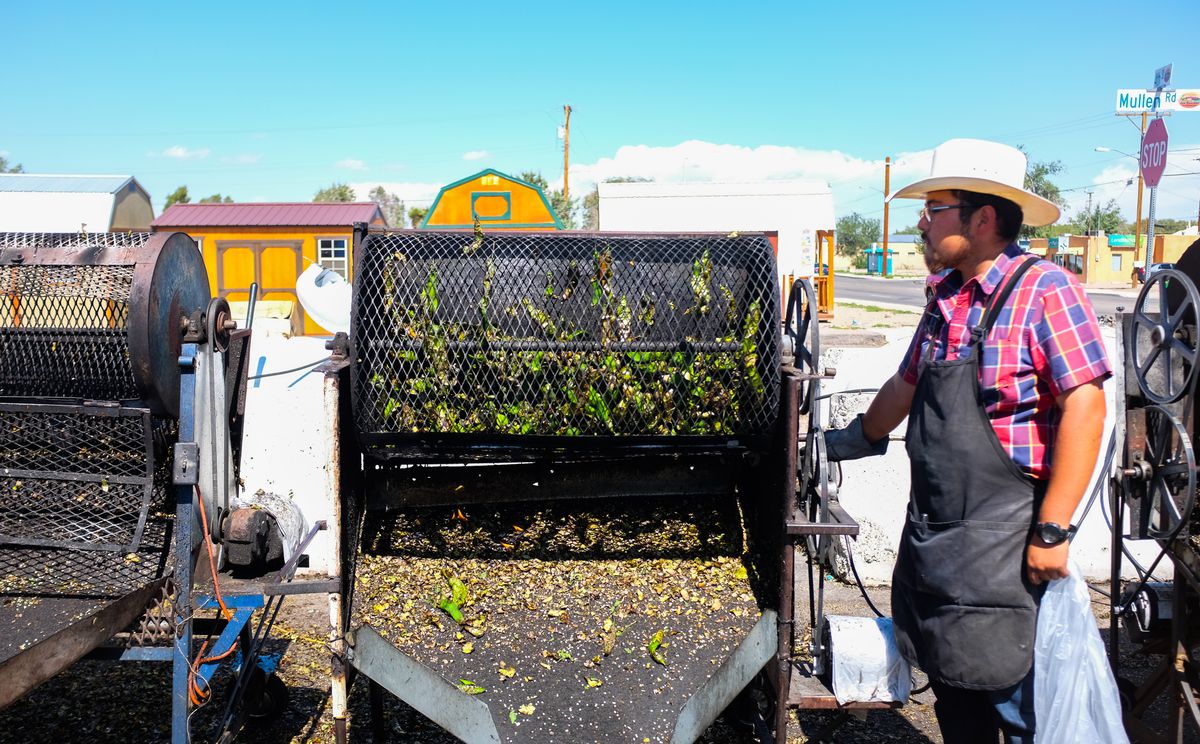 Throughout the southwest, you’ll find red and green chiles on everything from bagels to pizza — or even served whole, fried in tempura batter — yet no chile has become quite so famous as the long, meaty green pod marketed across much of America each fall as “the Hatch.” In truth, what we know as Hatch chiles are simply New Mexican chiles, dressed with a brilliant marketing strategy that was dreamed up in the early 2000s. That’s when the New Mexico Department of Agriculture sent Santa-size sacks of green chiles to grocery stores in key markets across the country, along with special roasters to blister the skins — and even staff to demonstrate the proper roasting technique. The word emblazoned on those sacks, “Hatch,” was the village of origin in southern New Mexico. (Hatch is also home to Sparkys, which serves one of the finest green chile cheeseburgers you could hope to squeeze into your mouth.) Hatch and the surrounding Doña Ana County do grow much of the state’s chile crop, but just as Champagne is a growing region, not a grape variety, Hatch is simply a regional marker for regular old New Mexican chiles. 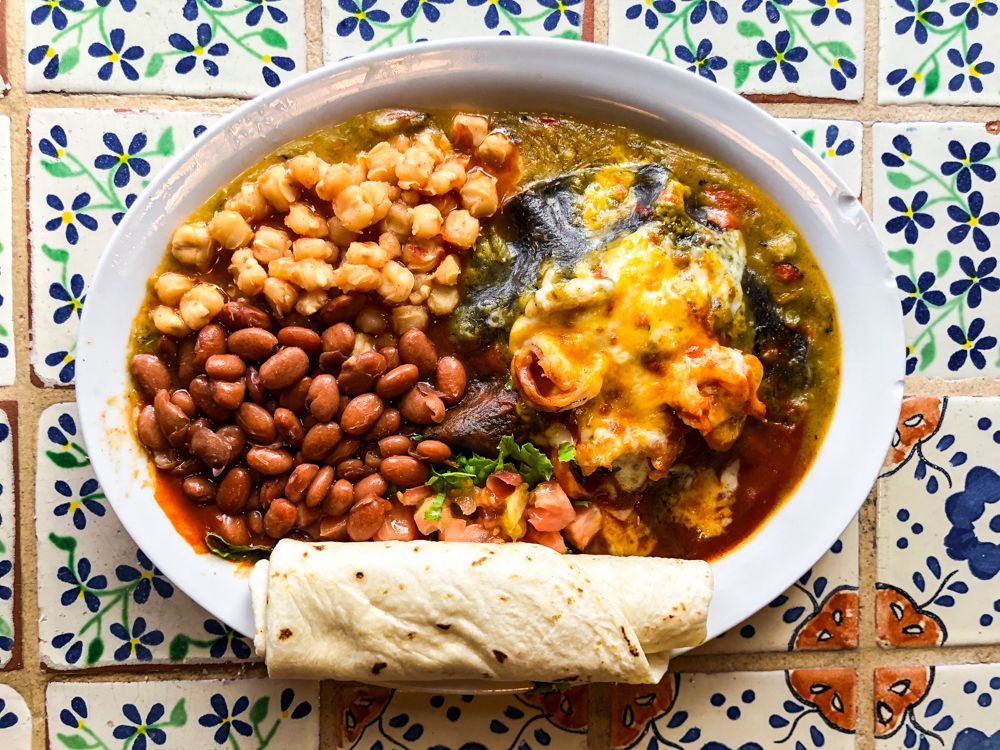 The Cuisine Is Largely Plant-Based

Three ingredients are the historical basis for all Southwestern cuisine: Corn, beans, and squash, collectively known as the “three sisters,” were the staples of North American agriculture perhaps as early as 7000 B.C.E. Dried pintos were and are the go-to bean throughout the Southwest. Slow-simmered on the back of the stove, they’re eaten whole, often by the bowlful, as in the soulfully satisfying version ladled up at El Parasol in northern New Mexico. The beans can be drained of liquid and spooned out as a side dish, or mashed, then fried with lard or bacon drippings to become “refried,” a style more popular in Tex-Mex. Both whole and refried beans, with or without meat, fill burros, burritos, tacos, tostadas, and more. There have been, and are, other varieties of dried beans used, including Anasazi, tepary, and black beans, but pintos are the surest sign of the Southwest.

It may not be as common throughout the region today as its sisters, but squash is still a historically important food source. Calabacitas, New Mexico’s ode to high summer, is the staple fresh vegetable dish. Meaning “little squash,” zucchini or other thin-skinned squash is sauteed with corn and chopped green chile. You’ll find it as a popular filling for vegetarian and vegan burritos, tacos, and as a standalone side, deliciously filling the plates at Tortilla Flats in Santa Fe.

Of course, while the region’s historic staples are vegetarian, the typical Southwestern diet is definitely not. Arizona shares Texas’s love for beef, thanks to its lesser-recognized ranching heritage. In fact, some people claim that Prescott, Arizona, is actually the true home of the first chili, rather than Texas. (Once the territorial capital, records mention that the town’s first restaurant, the Juniper House, was reported to have served chili as early as 1864.) Also in Arizona, machaca and carne seca are beloved forms of dried beef to this day, though they were originally developed to preserve the meat prior to easy refrigeration.

In the Four Corners of New Mexico, Arizona, Utah, and Colorado, it’s more common to find mutton and lamb. These meats, or goat, were the classic base for carne adovada, northern New Mexico’s treasured red chile-bathed meat preparation, before pork became more common in recent decades. 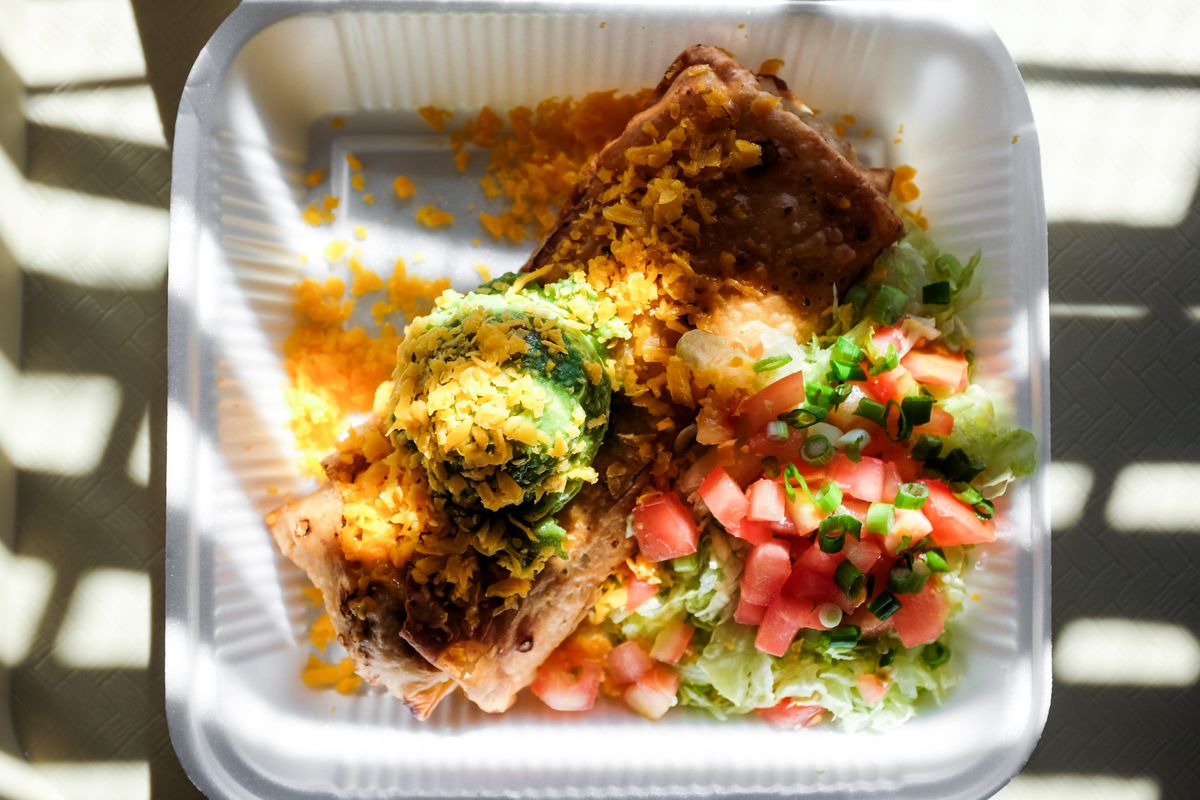 The Signature Corn Is Not Yellow, It’s Blue

Without a doubt, the most recognized of the three sisters is corn — but unlike the sweet yellow and white varieties prevalent throughout other parts of the country, the corn traditionally grown by the Hopi and Pueblo peoples of New Mexico and Arizona was blue. Use of this blue corn, known for its nutty quality and higher protein content, stayed pretty local until the 1980s, when it was widely appropriated for the blue corn tortilla chips that now blanket the country.

But the purplish tortillas from which these chips are cut remain a specialty of northern New Mexico, where the Spanish and Pueblos lived side-by-side in remote isolation for more than a century. Here, you’ll most often find blue corn tortillas as enchiladas — flat and stacked, not rolled, since the tortillas tend to be less supple than ones made from yellow or white corn. The Shed in Santa Fe is often considered the gold standard of blue corn-cheese enchiladas, especially when bathed in red chile. The corn masa ground to make tortillas can also make blue corn tamales, wrapped in corn husks and steamed, and you’ll now find blue corn pancakes popping up on menus across the country (the version at Tecolote Cafe in Santa Fe showcases the corn’s nubbliness and earthy taste). Blue cornmeal is also a common crust for trout and other fish from the rivers and streams of the San Juan Mountains and Gila Wilderness, and Santa Fe’s venerable La Plazuela serves them morning through mid-day.

While corn was, historically, more central to the region’s foodways, wheat — the Spanish planted it pretty much wherever they settled — is part of the story here, too. The Southwestern canon includes an array of flour-based specialties, from the sweet and savory poufs of fried dough known as sopaipillas, to traditional fry bread, to the tortillas of southern Arizona, which are rolled out paper-thin to the size of an extra-large pizza. The unique breadth and flexibility of these tortillas made them the perfect wrapper for Arizona’s stuffed burro, often heftier than its relative, the burrito. Thin Arizona tortillas also encase the burro’s deep-fried counterpart, the chimichanga; the crunchy favorite now found in restaurants and freezer cases nationwide was reportedly invented in Tucson at the historic El Charro Café. 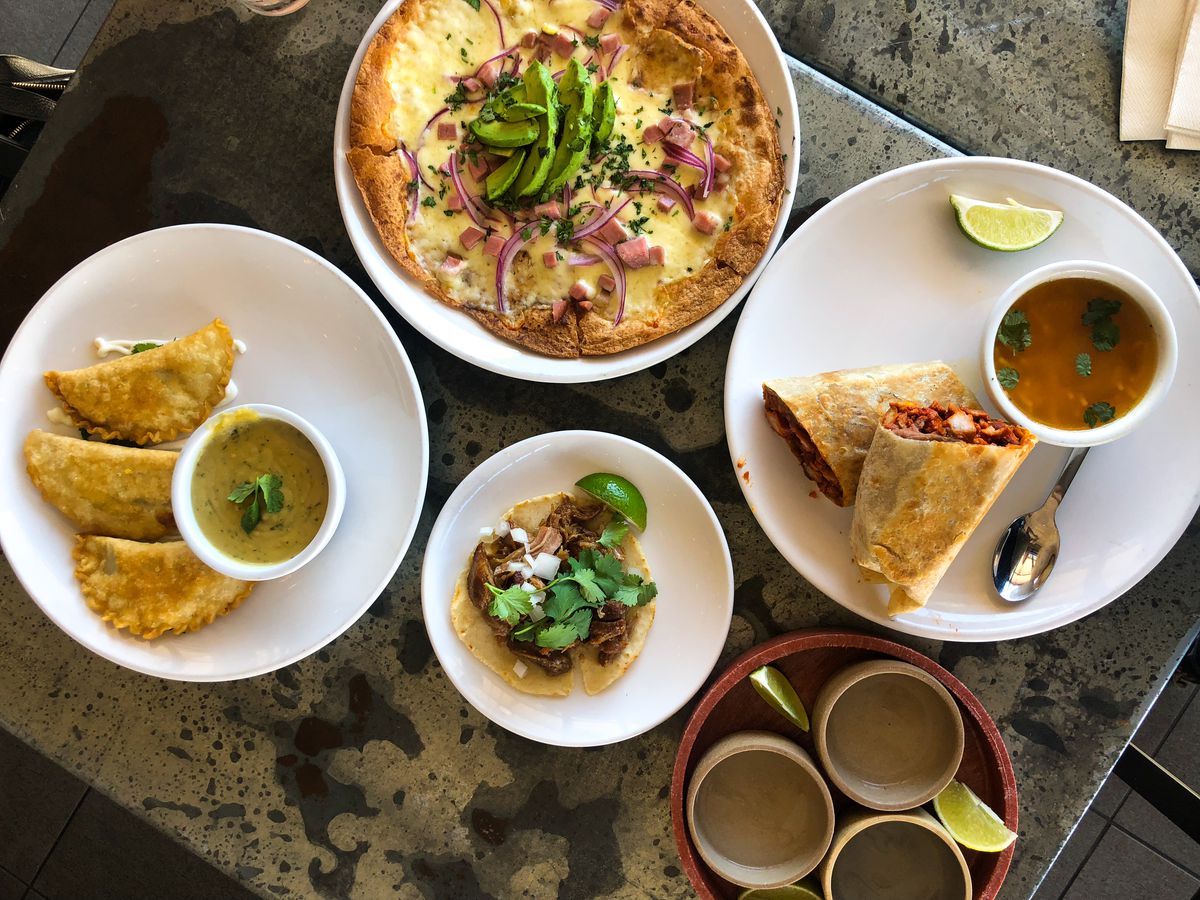 Southwestern food hasn’t always been the overshadowed cousin to Tex-Mex on the national stage. Back in the 1980s, a group of mostly white, mostly male chefs — Mark Miller, Bobby Flay, Brendan Walsh, and Reed Hearon, among others — created a Southwestern splash on the East and West coasts by riffing on some of the region’s classic ingredients and cooking styles, with dishes like duck confit tamales and lobster tacos. However, many of these chefs were cherry-picking flavors from a culture that was not their own, with little acknowledgement of the heritage from which these foods were taken. And, perhaps as a result, mainstream America’s excitement over “Southwestern food” became a passing fad, like the Cajun or Franco-Japanese trends of the same decade.

In recent years, though, there’s been a resurgence in interest in the historic foods of the Southwest and Mexico. Restaurants like La Posta de Mesilla outside of Las Cruces, New Mexico, and Mary & Tito’s Café (a James Beard Foundation America’s Classic winner) in Albuquerque are family-owned-and-operated establishments, in business for generations. They, and their chile-laced cuisine, never received the national acclaim that big-name chefs did back in the 1980s, but are recognized as standard-bearers today.

There’s also a spate of new Southwestern restaurants, far more culturally in-tune than their ’80s forebears, boasting chefs of Native and Hispanic heritage who put their perspectives on the plate. Cecelia Miller, a member of the Tohono O’odham tribe and owner of Phoenix’s Fry Bread House, also took home a James Beard America’s Classic award for her spirited menu of fry bread, burros, and hearty red chile. John Rivera Sedlar, a chef who first made a name for himself in 1980s California, taps into the memories of his grandmother’s cooking at his most recent restaurant, Eloisa in Santa Fe, where the tacos might sport jicama “shells” or house-cured pastrami with mustard salsa. At Campo at Los Poblanos in Los Ranchos de Albuquerque, chef Jonathan Perno’s family history and the fertile Los Poblanos farmland on which the restaurant is situated shine through on the menu.

Today’s chef-driven Southwestern restaurants also tend to favor traditional crops and sustainable livestock — in an increasing number of cases grown and raised by the chefs themselves. Blake Spalding and Jen Castle, the two-woman team behind Hell’s Backbone Grill & Farm in the wilds of southern Utah, were among the early wave of American chef-restaurateurs to start their own farm, showcasing the produce alongside local trout and grass-fed beef in dishes like a deep red-chile posole. George Gundrey, second-generation proprietor of Tomasita’s and Atrisco Cafe & Bar in Santa Fe, raises a heritage corn for a dish called chicos, a nearly forgotten preparation of oven-roasted and sun-dried kernels that get stewed in stock and mixed with pinto beans.

Dishes like these have made Southwestern food indelible. In the wake of America’s newfound appreciation for its homegrown cuisines — southern, Tex-Mex, California — this under-recognized regional treasure is overdue for a celebration. Smothered in a gutsy spiced chile sauce, of course. Red or green: your choice.

The freshest news from the food world every day